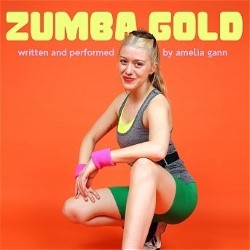 Cathy has unfulfilled dreams. She’s a performer in search of an audience, held back by the mental scars caused by a Back Street Boys themed disaster at a school talent show aged 13. Her only friend is her agoraphobic herbal tea drinking girlfriend, Patty.

Amelia Gann wrote and performed this lively and touching play, presented at the spacious and beautiful pop-up venue in the rear of the Pleasance Courtyard.

Gann has created a character who, despite all her flaws and many objectionable qualities, the audience really cares about. I genuinely wanted Cathy to succeed. And Gann is a terrific dancer. Her portrayal of several elderly characters, just by the way they dance, is really impressive. One-person, multi-character shows can be difficult to follow. No such problems here.

My only slight niggle is found in the final moments of the show. I do recommend you see Zumba Gold, so I won’t spoil the ending here, but it did seem rather rushed. One wonders if the show was cut for time, but for me much more of the denouement should have been shown, not told. The epilogue was far too busy for it to be left to the narrator.

That said, Zumba Gold is a wonderful ride and I’d very much like to see it developed further. As a writer, actor and dancer, Gann is a rare talent.