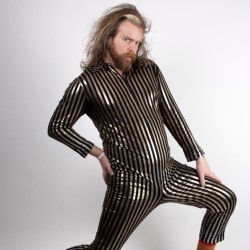 According to Muppet Wiki Paul Currie is a puppeteer, street performer and stand up comedian most notable for playing the lead Muppet, Potto on Sesame Tree, the Sesame Street spin-off that aired on BBC2 and CBeebies in the UK.

According to The Skinny, Currie is stand up comedian, “filled with so much comic energy, it has actually driven him hilariously fucking insane”.

I can only concur.

Currie is a superior high intensity clown. He bounces along to the Muppet Show opening number and into the intro I’m Paul Currie – to the tune of My Sharona by The Knack. He enthusiastically welcomes the audience – “all the XX chromosomes, the XY chromosomes and the medically random chromosomes… we are all random chromosomes, gender is a construct”.

And so it turns out that within the noisy, flashy silliness, (“maraca/Chewbacca”) Currie has something to say. The title TEET means something. We explore gender, veganism, cultural imperialism, male nipples, madness during lockdown. His reworked Covid-19 public information film, based on the original advert voiced by Mark Strong to the tune of Bring It All Back, by S Club 7 is just marvellous.

This is a tech heavy hour, with endless sound and lighting changes – always a risk during the Edinburgh fringe where so much can go wrong. Everything works without a hitch, so it was great to hear Currie thank James Hingley from the stage mid-show. Good techies don’t get enough credit.

One fresh idea after another explodes from the stage like firework display at a millionaires wedding.

TEET is very difficult to describe, which is why this review is more of a list than a critique. Let’s just say that it’s bloody brilliant and leave it at that.