Victoria: We are three award-winning, champagne-swilling, furiously feminist festival she-wolves who have come together to create an all-singing, all-dancing, all-fighting power trio called Fringe Wives Club. We are unleashing our debut show in Edinburgh after a smash-hit tour of Australia, where we won Best Cabaret at Adelaide Fringe and were nommed for Best Newcomer at the Melbourne International Comedy Festival. If you want disco-dazzling original songs, epic dance moves, an arsenal of instruments, an explosion of sequins and some five-star sass, you better come and get it from us!

Victoria: Three years old. A neighbour’s 21st birthday. There was a karaoke machine with mic, and a table accessible enough for my chubby little legs to climb up into glory. I snubbed the machine and went full a cappella, delivering a powerful rendition of Somewhere Out There, the theme from classic 80s animated feature An American Tail. People laughed and cried, and I was prematurely hooked on the ability to provoke emotion without resorting to out-and-out toddler tantrum.

Victoria: The Wives and I have, over the last few months of touring, perfected our pre-show coven ritual. We circle up in full black-velvet-hooded-cape-witchy realness, give each other a consensual motorboating (aka. boob raspberry), we down a cheeky glass of bubbly, then remind ourselves how much we love one another, and how lucky we are to do this crazy job. We raise our arms over our heads together like champs and walk onstage feeling like united KWEENS!

Victoria: Best? Getting the first 5 star review from Fest’s first ever season at Adelaide Fringe this year. The reviewer completely understood the way we use comedy, personal anecdote and music to approach difficult topics, creating a space for open dialogue. Worst? A Herald Sun reviewer actually mansplaining what feminism is (thank you SO much Mr. Man), passively aggressively complimenting and then reneging on it (including this corker: “There is no more beautiful sight at a festival than watching women do physical comedy.” Wow. Creepy af.), and loudly decreeing (with no fact-based references) that “most women in the US & U.K. do not identify as feminists” (just… whaaaat?).

Rowena: Yes. To be honest, I find reading reviews quite fascinating. It’s intriguing and sometimes totally illuminating – either it lights up aspects of the show, or the reviewer’s views on the theme or topic, and both can be equally interesting!

Rowena: Artists and reviewers live in a symbiotic relationship. Great critics get their teeth into a show’s themes and help unpack these within a cultural (and sometimes historical) context. This can totally open up a work for an audience member (and sometimes the artist as well!). Great critics also offer creative criticism where needed, helping artists see weak spots they’ve missed or giving them a chance to see their much loved show through someone else’s eyes. And in return artists give critics a chance to experience the whole messy, beautiful, absurd world through vastly different creative experiences. I think it’s a pretty ace exchange of skills!

Rowena: I live in Australia – so I have no idea what the UK laws around this might be. But I recently finished reading an absolutely extraordinary non-fiction book called Lonely Courage, about some of the female SOE agents who were parachuted into Occupied France during the Second World War. I couldn’t put it down it was so gripping, but I also found it intensely harrowing to read about the extremes of torture and horrific deaths of some of the women at the hands of the Nazis. If anyone wants to think about making jokes about the Nazis, I would recommend reading this book first.

Tess: I reckon there are subjects that need to be handled with care, and by the right person. Hearing a dudebro comedian attempt to use sexual assault as a topic and minimise the issue is the worst (just because you actively say “I’m a feminist” doesn’t justify your hot take on this “buzz topic”), but watching Adrienne Truscott take down rape culture moves the conversation forward.  But I think comedy is the perfect forum to discuss difficult topics, and a good comedian will know to craft the idea (especially if it’s a provocative one) and consider the language and viewpoint – their own as well as the people in the audience. Do the work and then read the room, people!

Tess: I’ve strained my back and pelvis by lifting a full-grown man and spinning him around my body like a hula hoop. I feel it was worth it for the comedy, but my chiropractor does not agree.

Tess: Woodford Folk Festival in Australia, this past NYE. It was our first time there, and we played three shows. The first night we had 300 people show up, curious to see what Glittery Clittery was. The second it was 800 and the final night the tent was overflowing out into the bushland. There was a band playing that festival that had been accused of sexual assault. The atmosphere was ELECTRIC. People seemed to be coming to our shows to seek a sense of community, to howl together and to celebrate a year in which big change had started to occur, and to dance it all out together and have a bloody good time. In fact, it was the time of the super-blue-blood moon. Very potent witchy vibes all round. The three of us would tramp across the huge festival site, lugging instruments including a comically large double bass, to be stopped every two minutes by people who had loved the show, or wanted to discuss ideas or invite us to tea, including the most woke 16 year old boy I’ve ever met, who came to every show, sat up the front and is, I’m fairly sure, the future of feminism and the advancement of equality and social justice. 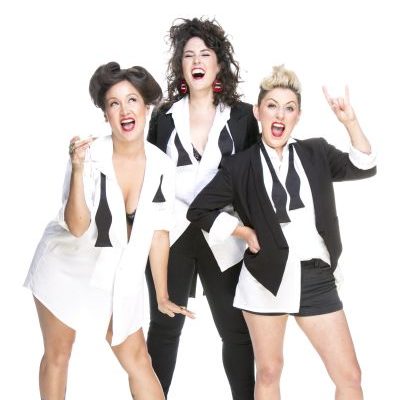