Tell me about your 2022 Edinburgh show, White Noise.

White Noise is a funny, self reflexive and fiery conversation between myself, a white South African ventriloquist, and my celebrity political analyst puppet, Chester Missing. It’s the confluence between my degrees in social anthropology and years developing a stand up style comedic & political voice, using ventriloquism. This is not a variety show style act, although it has that level of delight and playfulness, but with more thought. It’s the use of humour and puppetry to introspect on my own place within the socio-political status quo, to de-centre my identity’s normativity and shine light on how being white has shaped my life. Years spent interviewing actual anti-apartheid struggle heroes and doing satire on TV in the South African space have given me some unique experiences on this front. The premise of the show is that I want Chester to roast some racists but Chester won’t co-operate unless I deal with my own racism. And because our actual story is wild it’s a rollercoaster ride. We talk about literally going to court fighting racism, about how racism has shaped our identities and in many ways the whole of Western society. Chester Missing hilariously debunks all my misconceptions about race, from not seeing colour, to the myth of reconciliation without justice. He literally exposes and incinerates times I myself have been racist, so you get to sit there and judge, with laughs. It’s also just an hour of funny thoughtful comedy ventriloquism.

Who is Conrad Koch and who is Chester Missing?

I am a well known double Emmy nominated South African political satirist and ventriloquist. I use an MA in Social Anthropology to shape how I comment on the socio-political status quo. Being a white commentator in post-apartheid South Africa means I need to be very aware of how who I am shapes what I say, and how that in turn is being received by what audience. My theatre shows have toured SA, Canada and Australia to critical acclaim. Because our market is so small relatively I have two kinds of shows – the one is very commercial and accessible, just really fun & funny ventriloquism; the other is very hard hitting social commentary, in particular on race and racism. I grew up in Cape Town. On TV in Southern Africa my most well known character, Chester Missing, is famous for interviewing senior politicians, on his own, Muppets style. He’s been granted interviews across the political spectrum and is a household name in South Africa for doing so. He even wrote an award winning book, and was once one of New African Magazine’s Most Influential Africans.

You’re a multi award winner and you’ve been nominated for an International Emmy twice. Chester Missing was the first recipient of the Ahmed Kathrada Foundation’s Anti-Racism Award. You guys know what you’re doing. But have you come those who missed the point?

Doing comedy in South Africa means we always need to be able to change our tactics to pull in even people diametrically opposed to us politically. Our environment is economically poor, and has extremes of opinion, from anti-apartheid activists, to highly conservative (often racist) white audiences, to a highly capitalist middle class of all races. When white and middle class audiences miss the point re my anti-racism comedy, they usually just go quiet rather than getting offended. Because I specifically nail myself first, it’s very hard for them to actually take offence. Also, getting offended at a show nailing racism is a great way to out yourself as a racist. The biggest hurdle is getting white people to come see my anti-racism shows at all. I usually end up doing shows on anti-racism for predominantly black audiences, which is gratifying and very ironic, and ultimately not the goal. Black corporate executives who try to book the show are almost always blocked by white counter parts. The offence comes before the show – at the very idea of talking about racism. Politicians on the other hand for the most part love Chester Missing, which is perhaps just as problematic. Our politicians mostly have a brilliant sense of humour – it’s part of our national identity. The most corrupt and racist ones are usually too scared to talk to Chester Missing anyway, and every political party thinks Chester is biased against them somehow, and tell us so regularly on social media. It’s hilarious. One difficulty of doing this work in South Africa is that speaking truth to power in a poorer economy means that my core fanbase is poor (and black), which means I have to walk the tight rope that the people who are paying me also being the ones who I need to nail hardest. That dynamic causes me endless anxiety.

It says that Chester Missing is the first puppet in history to literally go to court, fighting racism, and won. What happened?

Chester Missing is a puppet who is famous for doing political satire on TV in South Africa. He appears on his own without me in the shot. He has a large twitter following. In 2014 a well know South Africa racist musician tweeted his vile opinion that “In my books blacks were the architects of apartheid” (Let’s call him Bob so he doesn’t get the Google ratings). Chester replied: “That’s because you haven’t graduated above books that you colour in”. But because of how social media just creates feedback loops where we just play to our echo chambers it did nothing to make with withdraw the abominable notion that black South Africans somehow deserved the atrocities of apartheid. This was not fair debate, this was overt and vicious racism. Chester went on a campaign demanding businesses that sponsored events this musician was performing at decide whether they support his opinion, and if not why they hadn’t withdrawn their sponsorship. By not withdrawing they were vindicating this white supremacist opinion. The power of white South Africa economically to support such racist artists and media is part of why we have not actually had justice for black South Africans, and why the conversation on apartheid and racism has not progressed. We can literally decide what truth we want to hear. Bob ended up lying to a magistrate about how he was being harassed, and the junior magistrate who heard his plea granted him a 2 week restraining order whereby if I or Chester Missing, the puppet, mentioned Bob on social media or on stage we could be arrested. I could. Chester lives in a suitcase and doesn’t care. It was that ludicrous. His name was in the court papers, so of course he went to court. The racist lost with costs.

Do you think Western and non-South African audiences will relate to a conversation on racism from South Africa?

Having toured Canada and Australia I have come to realise that the same conversation is happening everywhere. The thing about South Africa is that we are one of the few places in the world where so many white settlers live so close to a far larger number of black people and people of colour. For example the idea of Australia Day, where many Australians celebrate the day they colonised the country, would be unthinkable in the South African space. From Brexit, to sending refugees to Rwanda to the discussions on freedom of speech and wokeness coming from a country described by the World Bank as the most unequal on earth gives one a perspective of just how violent colonialism’s legacy has been and just how far we have to go to fix it.

Ventriloquism’s charm is that it allows adults to engage in a suspension of disbelief where a puppet is treated as real, and is able to talk to its own creator. This is quite unique, although in general the skill is usually used at the level of a magic trick, it can actually allow for some quite powerful self reflection. As I was going pro as a ventriloquist I was also studying social anthropology, which has at its heart the idea of self reflexivity. Anthropology’s answer to the racism of white people telling everyone what people of colour are doing, which is what anthropology used to be (and I’m sure in some case still is), was to look within and reflect on our own Western, usually white, straight, male outlook. Ventriloquism is the perfect art form to do that with. Also, just how many stand up comedians do we actually need? 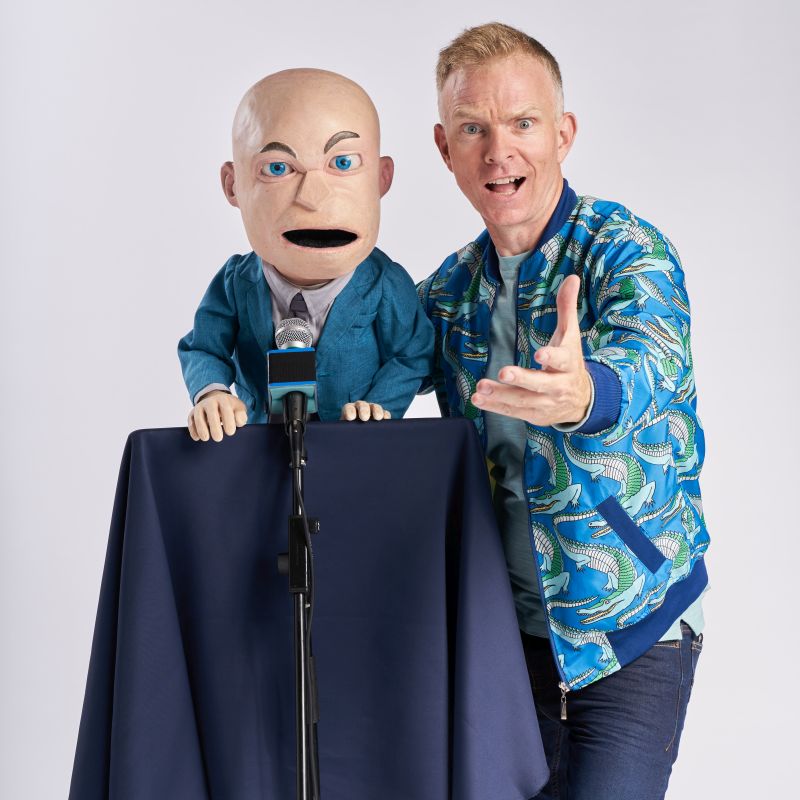