Imagine if David Copperfield and Claudia Schiffer were from the Gold Coast circa 1989. Now crank up the music, roll them in sequins, set them on fire, and you’re almost at Peter & Bambi Heaven. We talked to Bambi (aka Gypsy Wood).

Peter & Bambi Heaven, Australia’s most loved up deluded dancing magicians and they’re about to explode into town. They’ve put together the greatest magical variety stunt show possible, auditioning acts up and down Australia’s Gold Coast, but at the last minute they’ve fired the cast and decided to go it alone.

Well I guess its a bit like a strange fantasy world or a bonkers world fair. Filled with Art, Culture, Creativity Excitement, Broken Dreams, Stars in the making and lots of bullshit. Its addictive, competitive and beyond out of this world thrilling and inspiring and with any luck you might just get to learn something about life?

My sister Lotte inspires me. She’s got two kids under 4, they are as wild as the wind. I honestly don’t know how she keeps going? But the children are so funny and beautiful and I miss them so much when i’m away. My nefuw Cassius is my sweet little best mate. We enjoy being so naughty together. We have to get separated as we often make a huge mess. Its important to have children in your life.

I was once performing striptease in a small cabaret club in Switzerland. I went over to a table of women with my feathers and a very angry lady pushed me away. I think she was very “triggered” by my “feathers”. What a bitch.

I love it when people are disappointed we aren’t real. Like this review from our last Edinburgh show.

“I was disappointed at the amount of cheap tricks this duo employed to gain laughs from their audience. It seemed to be some sort of rule that if one of them was fully/appropriately dressed, then the other had to have body parts on display. The use of a large amount of haze helped to completely obscure the audience’s view whenever a ‘magic’ trick was happening and the destruction of various fruits and vegetables doesn’t constitute good magic for me”

“I don’t know that I have the appropriate words to fully describe this show, because, despite it making me laugh, felt as if I was laughing for the wrong reasons. I was shocked, confused, and by the end I felt very very sorry for their stage management team. At least I got a nice heart shaped balloon during the mime portion of the evening… “

I’d like to be a midwife. But I don’t think id be very good at it. Id be good at lighting candles and dancing around and getting excited about a baby coming into the world. But that all

On Death and Dying by Elisabeth Kubler-Ross

What is the strangest job you had to do?

I was a hand model for a few years in Sydney. Totally bazar to think on my hands on big bill boards in Japan. It wasn’t as easy as you think? I often had to stand with my hands in the air till all the blood ran out of them to make them look perfect for the photos.

Hopefully that will happen one day. I’d make a TV show with my comedy partner Asher Treleaven about all the wonderful adventures on Peter and Bambi in Australia and around the world. 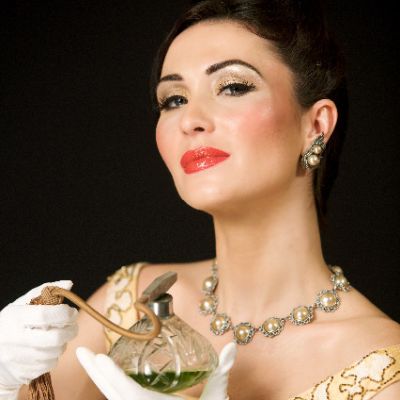