Open Arms is billed as a laid-back, witty and uplifting stand-up comedy show about a man dragged and dropped straight into the deep-end of adulthood.

Hi Kwame, tell me about your show, Open Arms.

I’m very excited to be bringing my debut show to the Fringe this year. It’s based around the last three years of my life, which has seen me graduate medical school, leave my family and home in South East London, and move up to Birmingham to settle into my new life as a junior doctor. It’s been a hectic, scary and challenging time for me. But it’s also had its rewards, as well as many funny moments along the way. The show presents a collection of my best observations and anecdotes, giving the audience the chance to relive my journey, and laugh with (and more often, at) my experiences.

Edinburgh has a strong place in my heart. I’m a huge fan of live comedy and it really doesn’t get any better than the fringe festival. Hence why I’ve been up to the Fringe every August for the last 7 years- most often in a tourist capacity and a few times to dabble in the comedy myself. But for the first time, this year, I will heading up for the entire month of August to perform a full-length show for the whole run. It’s a moment I’ve been looking forward to for a very long time, and can’t believe it’s almost here(!)

My parents are a big inspiration to me. They are the most down-to-earth, loving and hard-working people I know. And they continue to surprise me every day! When I first started establishing myself on the comedy circuit, my parents were not my biggest fans, worrying that it would disrupt my medical degree (and also just not finding me that funny). But I stick with it all, and they’ve grown to see how much it means to me. Now, they’re one of the first people to ask me when my next gigs are, or give me support after a terrible gig. My Mum writes very inspirational WhatsApp messages!

Regardless of the size of the venue, or the importance of the gig, the best gigs for me are always the ones where new material goes down well. Nothing beats the rush of releasing an idea you’ve been toying over for ages out into the public and it going down as well (or even better than) as hoped! My worst ever gig is probably one I did in Essex 5 years ago. It was my first ever gig as an opener, and I only just about had 20 minutes of decent material (assuming everything was going well). But none of it went well. A packed out room but deafening silence. I was too embarrassed to make eye contact with anyone on the way out, escaping through a fire exit out back. Even now, I still shudder when I think back to that night. But it’s now the benchmark of a bad gig for me, and thankfully I haven’t died that hard since. It helps keep me going.

I’d need some form of creative outlet to take my mind off some of the gloomier days of hospital medicine! If not comedy then maybe some kind of artist? Painter or sculptor, something hands on!

The last book I read was ‘Lateral Thinking: A Textbook of Creativity’ by Philosopher Edward de Bono. It gives a lot of tips on how to step back and look at a situation in different ways. I used a lot of the techniques in this book to help develop different jokes and stories within my show, and I’d thoroughly recommend it to anybody with an interest in comedy writing!

How will you unwind in-between shows during the fringe?

My fringe house is by the meadows, so I’m hoping to do lots of running to de-stress . I also have postgraduate medical exams in November, so I will be doing some revision for those, to take my mind away from comedy. These plans are, admittedly, overly ambitious… It’s more likely I’ll be watching shows, spending money I don’t have and staying up waaaay too late. But I’ll be happy either way- I’m just pleased to be escaping the routine of work!

I had this weird dream about a banana farmer in Yorkshire, who owned a unique (almost magical) patch of land that had just the right climate to grow bananas, and he was trying to compete against the Caribbean export market. I’d try and make something like that into a quirky, mockumentary, called ‘El Tropicana’, shot in a similar style to The (American) Office and Parks and Rec. I’d cast anyone willing to commit any amount of time to such a wildly ambitious concept. Payment would consist of any bananas not harmed in the making of the show. 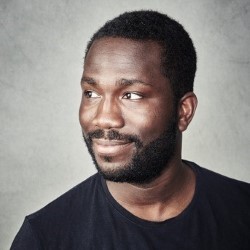