Writer/performers Gillian Hardie and Keddy Sutton’s arrival at the Edinburgh Festival Fringe follows sell-out performances and five-star reviews for their latest collaboration, Scottie Road the Musical. Martin Walker asks Keddy what the show is all about.

“A heartfelt tale and homage to the wonderful world of Musical Theatre.”

What made you get into performing comedy and how did you get started?

“I got into performing comedy at an early age. I used to entertain family and friends with my George Formby / Babs Windsor / Cilla Black / Dorothy impressions. Hello? Come back… please keep reading… ha ha…

“I didn’t understand why they laughed either… but I loved the response. I still don’t understand why I love being laughed at. But it feels great and it seems to come quite naturally. I had a really funny circle of friends at school. I laughed none stop from 11 to 15. I used to record my own radio programmes for friends… with my own horrific comedy tales in a pretend Simon Bates ‘our tune’ show – to be honest I still do that now.

“I had to distract from my brace and perm, you see, and making people laugh worked quite well. From 16 to 18 I did A-level Drama and every character was based on ‘Mrs Overall’ from Acorn Antiques so I thought I better get to drama school and vary it a bit. I laughed for three years there ‘n all. I trained in comedy and clowning and felt at home in a pair of comedy glasses and a wig.

“My granddad Jack always had a joke for every minute. You’d be eating your tea and he will have planted a chip on your shoulder just to he could say,” Have you got a chip on your shoulder?” and my mum used to take me hiking up Snowdon and to make it more interesting she’d bring a bag of wigs and we’d have to improvise different characters on the way up. I could rattle on for hours improvising monologues.

“Which leads me to my Ken Campbell era. I came back to Liverpool from London and auditioned for Ken Campbell’s Farting Around in Disguises at the Everyman Theatre. He asked me to speak gibberish, which I could strangely do rather well and because of this we bonded and I was the first improviser he chose for the show. He then went on to invite me to perform in his Improv Company ‘The School of Night’, improvising musicals in the style of Judy garland in Jeremy Beadle’s library and the like…

“Those were quite magnificent years. In fact I performed with him in In pursuit of Cardeenio at the fringe improvising Shakespeare. I remember him saying, ‘Don’t make it too good or it will be as boring as the real thing.’

“Working with Ken and the team inspired me to keep on improvising musicals and that’s how I got to the point where I am now.”

What Advice would you give to your 17-year-old self?

“Always know your lines like the back of your hand then you can improvise off the page. Chillax. Keep smiling now your brace is off.

“And don’t buy those pink velvet trousers and wear them with a zebra print top and white fluffy cap.

“Oh actually do, because otherwise when you’re older and get asked this question you’ll have nothing to write about…”

Are you ambitious? Where would you see yourself in five and ten years time?

“Well I haven’t done too badly so far. I’d like to keep working playing comedy characters in theatre. I love devising, improvising, writing and singing.

“I’d also like to film a comedy sketch show and I’d like to write a children’s book.”

If you were curating a stand up show for television who would be your guests? 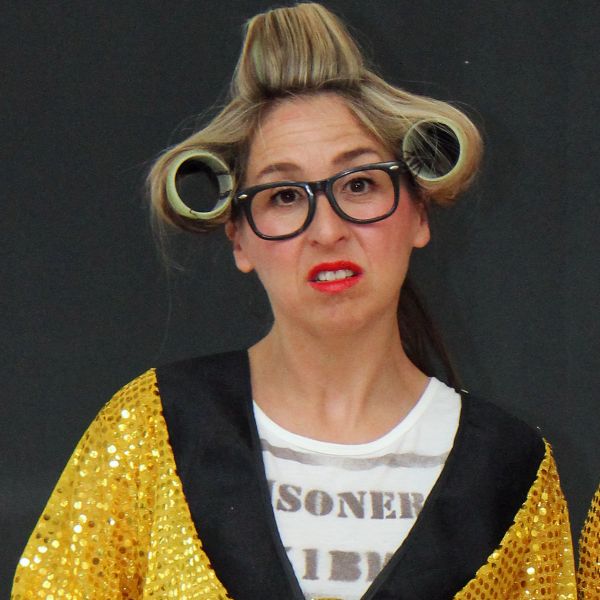