Luke’s new show has stand up, sketches and at least thirty impressions. It’s fun and fast and has some heart too! We asked Luke about Take A Long Hard Luke At Yourself.

I believe it’s my most honest and ambitious show yet. The stand-up looks at how we as a society are constantly being different versions of ourselves and the sketches are full of me throwing celebrities out of the comfort zone! Christopher Biggins reading the news, Dame Maggie Smith auditioning to be Bond and Frankie Boyle as the new grief councillor in Broadchurch. I’m really excited about taking this show to Edinburgh!

Edinburgh is the end of the school year where you show the rest of the class, your teachers and your parents what the hell you’ve been up to this school year. I hope I get to take home a certificate.

Lots of people inspire me in different ways. I love the greats as far as stand up in concerned. Louis CK, Katherine Ryan Trevor Noah to name but 3. I love watching character shows from the likes of Colin Hoult and Kieran Hodgson. I was brought up watching the Marx Brothers and Black Adder so all of those guys too.

Best experience was when I took my first show to Toronto and performed it in front of 850 people. My worst was when I was performing a gig to 7 people at a festival when Lionel Ritchie was on the main stage at the same time and then there was firework display. I also had a coughing fit halfway through. It was the worst hour of my career!

My best review was from Dawn French when she tweeted saying I was a ‘blummin genius’. My worst was when my Mum said ‘I’m sure some people will like it’

Well I was in musical theatre for 4 years before I got in to comedy so I would probably still be doing that but I suppose that is still performing. I feel I’m quite good at relationship advice hahaha! So maybe a marriage councillor.

It would be me in a show that is a cross between the Generation Game, Have I got News For You and The Fast Show. So hopefully you’ll see Have I Got A Fast Generation For You soon! 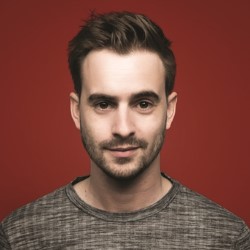