A graduate of Brighton University with a degree in Illustration, Rob Pybus works freelance in many areas of graphic design, animation and storyboarding. In 2014 he presents The Living Cartoon – a unique comedy show at the Edinburgh Festival Fringe.

“The Living Cartoon is about propelling the audience through a vivid and unforgettable experience. Projected animation gives birth to living breathing characters and scenarios that come together in a whirlwind of action and calamity. Along the way I get to drive cop cars, ride super bikes, get shot to bits and fly bombs into palaces. No plot is too farfetched and no situation is too stupid. My body is a prop and mingles with this cartoon world like it is one true reality. I have several of these cartoons to share with the people of the Fringe and I can’t wait to give them something hopefully a little different.

“My idea of fun is creating unfamiliar worlds within stories that can’t have been told yet. It may sound a little try hard but here’s the thing: as much joy as it is having your scenes and your characters described via the mouth or with the aid of costumes and props, I like mine to be more fully realised. Of course there are many great ways to captivate your audience and deliver the ‘goods’ to their imagination, but I like to think my approach gets you there a little quicker.”

Tell us about your involvement with Heroes of Fringe

“Being a last minute addition to the Heroes superb roster – due to a cancellation. I haven’t been involved with the group for that long. However knowing Bob Slayer as much as I do, he possesses the sort of energy and vision to make heroes something different. I want to be a part of that! I’ve gigged with Heroes acts previously and know their calibre is top notch and caters for acts looking to push things a little. Bob has been a great source of encouragement over the last few months. It will be my first Fringe so having an experienced coach will get the best out of me I think, give the audience something to remember!”

“The title Living Cartoon although brief gives you quite a good sense of what to expect I think. However, as literal as the title may be, it’s hopefully the first instance where upon people have seen this sort of approach in stand up. I’m fully immersed in an animated world that will twist and turn with chaos and absurdity. Using projections and my body as tools I will take you deep into a realm that serves up action, adventure and pain. You can join in at points and get fully sucked into its narrative and maybe become a true life hero. Although the stories play out a certain way, my acting is not the scripted sort so it’ll be pretty much a fresh experience each time.”

“The book of my life would be called The Man Who Ate Too Fast. This is because on the whole I eat extremely quickly. Don’t get me wrong I really like food but if I sit down for too long I get bored and eating quickly allows me more time to do other things in life. There’s never enough time for everything but it’s worth trying isn’t it? These days sleeping has started to slip down the list of important things. The tragic failure in all of this is that I will end up with a dodgy stomach and have multiple heart attacks. That doesn’t matter so much as the book will be packed with stuff that has kept me busy – most of it a complete twisted mess of pursuits that I shouldn’t have started. It could also act as a self-help book for people who want to be able to get on with their lives, and this book will be a ‘what not to do’.””

“I would start with Sam Hyde. He is different, bold, uneasy and sublime…most of the time. He likes making the audience his enemy which is only ever to highlight the fact we are all bigoted in some way. He posed as a talker at a TEDX talk recently which was fun. Tim Heidecker would be next as he has for me pushed things along on comedy in the past few years. His stand up routine is a nice examination of why stand up is one of the worst forms of expression. Brent Weinbach is refreshing and moves in similar cirlcles of weirdness to Tim Heidecker, but has a more strings to his bow in terms of variety in his act. Amroando Iannucci has been a source of inspiration for many moons, his choice of words in any given sentence is worthy of applause. He is ‘fun with words’ man.” 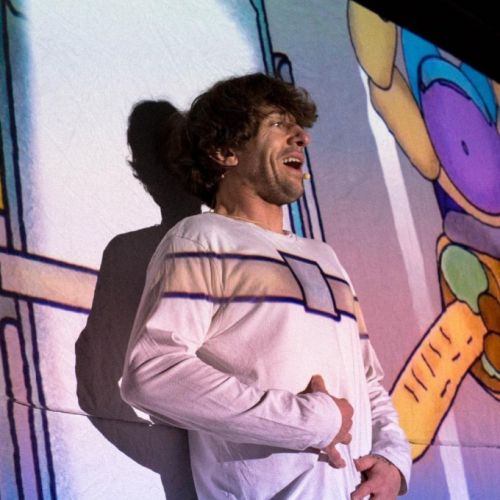