Tiernan Douieb says that his new Edinburgh show, Miserably Happy, “is another hour of stuff from my head but with jokes in. At least two. And the one use of the word ‘banana’”.

It’s a show about why people believe they’re right and stick with their views despite evidence, or how stupid their views sound. I’ve hopefully made a political show that isn’t topical so I don’t have to re-write it every 5 minutes because the last few years have ruined a lot of jokes.

It’s a city in Scotland that I go to once a year in order to pay rent twice.

I’m inspired by different people all the time. Most recently Kwame Anthony Appiah as his BBC Reith Lectures from last year were enlightening and eye opening. Bassem Youssef after watching the Tickling Giants documentary, and his fearlessness at fighting the Egyptian authority with satire. Labour MP Emily Thornberry who manages to take on the government with such brilliant sass and confidence. This list will probably change by tomorrow and I’ve probably forgotten loads too.

Best – Tough call but probably having to follow Robin Williams on stage at a tiny gig in West London in 2009. He lit the place up for 15 solid minutes. I’ve never been in a room that electric before or since. I was terrified about bombing but with the crowd that excited it would’ve been impossible to do.

Worst – Probably a few years ago when an angry man climbed onstage to punch me in the face because he got upset that I dealt with his heckle and then, due to a lack of security had to sit in the room till the police could come, ruining the first and second act’s gigs too.

Worst is either the one that described my show as pissing about with a space helmet, completely ignoring the hour of material I did in-between bringing it on as a prop for 30 seconds at the beginning of the show, put it down, and didn’t pick it up again at the end. Or the one that described me as like ‘your stoned mate in the pub’ which is just odd. Unless they have mates who get really energetic when stoned?

I’ve had some really great ones, but my favourite is one not from a newspaper but Mark Thomas whose comedy I adore. He came to see my show in 2015 and told the British Comedy Guide it was a “it’s a really lovely show, really good. A really good show.” Easily the one that meant the most to me.

I think so. I’ll just check. Wait a minute. Yep. Yep I am. Thanks for asking.

I’m torn between selfishly producing a TV version of my podcast Partly Political Broadcast which would involve mostly me, lots of political comedians I like, and guests who can actually explain current issues to the audience. Or a chat show where Malcolm Gladwell interviews various CGI’d dinosaurs. 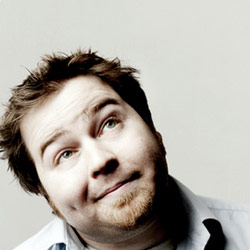