In Punderdog, Tony Cowards returns with his new show bursting at the seams with glorious gags, preposterous puns and witty one-liners. We fired over a Q&A to get more info.

Punderdog is the follow up to last year’s hilarious Daft Pun, which featured in the Top Jokes of the Fringe for The Scotsman, The Daily Mirror, The Evening Standard and The I newspaper. If you like your comedy fast and furious, daft and silly (and let’s face it, who doesn’t?), then ‘you’ll definitely enjoy this!’ **** (BroadwayBaby.com). ‘A brilliant joke-teller’ (FiveAA.com.au, Adelaide Fringe). After all, everyone loves a punderdog.

A rollercoaster of emotions, a month of extreme highs and severe lows. Playing to fantastically receptive packed houses one night, performing to one disinterested man and his dog the next. To paraphrase Charles Dickens, the Edinburgh experience can generally be described thusly “It was the best of times, it was the worst of times”.

All performers are inspiring in one way or another, just the sheer creativity and bravery of anyone who steps onto a stage with the intention of entertaining an audience is hugely inspirational.

Best experience was probably holding my own at a charity gig at the Bloomsbury Theatre where I was on a bill with John Bishop, Al Murray, Shappi Khorsandi and Stewart Lee amongst others.

Worst was probably dying horribly in front of 2000 people at a popular holiday camp.

Best? A review of my show at this year’s Adelaide Fringe called me a “brilliant joke teller” and said “There is no way you’ll leave Tony Cowards: Daft Pun with anything other than a smile on your face. He’s not the biggest comic name at the Fringe, but he is the most genius”, which was nice.

Well I used to work for an audio visual company, so I’d probably be a sound or lighting technician

Who is the saddest person at a pasta factory?

“Primate Challenge”, a game show loosely based on “Who Wants To Be A Millionaire” but involving wrestling monkeys and apes of various sizes rather than answering questions. For £100 you’d wrestle a Capuchin Monkey all the way up to £1,000,000 for taking on a Silverback Gorilla. To avoid animal rights protests Andy Serkis could play all of the simian parts. I’d host, enabling me to make loads of primate puns. 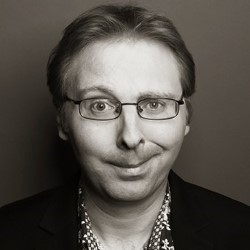