The Kagools: Tutti is an hour of anarchic fun. There’s no theme, it’s more of an experience; like Blue Man Group or paint balling in Swindon. We fired over a Q&A to get more info.

Other than that it’s quite a difficult one to describe but people always tell us they’re glad they took a punt on it as it’s so different and many come back to watch it again.

We love Edinburgh. It’s a month of good times and unbelievable stress in equal measures, tears, booze and battered foods, meeting new people, discovering new favourites and stumbling upon ridiculously brilliant shows. It’s a month of emotional roller coasters and asking yourself and everyone around you, ‘why did we do this?’. Then having an amazing show and remembering why.

We inspire each other!OK, no really…acts such as Umbilical Brothers, Trygve Wakenshaw, Tape Face, Dr Brown, Slava, old classics such as Lucille Ball and Victoria Wood… are all inspiring and light us up in different ways.For inspiration for our own shows however, we get inspired by films, art, music, theatre, dance and anything we think The Kagools would like or fit with. We take projection or lighting ideas from theatre, dance ideas from music videos, themes from films.It all feeds in.

Our best experience would have to be a beautiful moment during our first visit to Melbourne International Comedy Festival in 2016 when someone in the audience got the giggles so hard they couldn’t stop and then it spread through to everyone else, including us. It was a full house that night and we shared this glorious, spontaneous laughter for what felt like a lifetime. It felt like there was a shared special moment only inside that room at that time.

Our worst experience is always to do with our ‘surprising technology’, and it happens quite a lot. It’s usually about two minutes before the show is due to start; the technical equipment decides to go on a mini-break to Dusseldorf for absolutely no reason and we have a nervous breakdown and wail into our kagools until one of us has a brainwave and switches a cable and the show is saved. Every. Time.

We’re very lucky to have had generous reviews from press and audience alike. Feedback from audience is as important to us as professional reviews and we love hearing back.One that sticks out for us was from an audience member called Scott who wrote a review online. Here’s just one paragraph:

It’s been said that the most important element in comedy is timing and you can literally set your watch by these two frenetic bundles of joy. Being a huge fan of slapstick from the black & white era such as Buster Keaton, The Marx Brothers and also more current (and needless to say more violent) versions of the art form such as The Young Ones & Bottom, The Kagools are easily on the same par as Messrs Mayall & Edmonson for their comedic beats and I wouldn’t be surprised if someone somewhere offers them the chance at their own television show, silent or otherwise. Please don’t think that I would ever suggest The Kagools could replace any of the aforementioned giants of comedy but I stand by my word that they most definitely deserve a place alongside them.

Also here’s some critic quotes which make us blush (but we obviously bang them out to help us sell the show):

‘Brimming with wit and imagination… surely one of the outright funniest pieces of the entire festival’ ***** (TVBomb.co.uk)

‘Beautifully executed. Perfect viewing for all ages and nationalities’ **** (Chortle.co.uk).

Wilkinson: I would be a pool player or a landlady of a pub (that had a pool table).

Ford: I’d be a film director and all my films would be about strange pub landladies who play pool.

Ford: Sara Pascoe’s ‘Animal’.Loved it and recommended it to my two younger sisters.

What would you wear if you didn’t wear Kagools?

It would be a madcap game show presented by two silent women in kagools.It would be like an extreme Japanese game show, except the presenters don’t speak and part of the hilarity is the contestants trying to work out what they’re supposed to do to earn the points.The live studio audience give loads of encouragement and cheer for their side-oh hang on, that’s not far off what happens in our show… 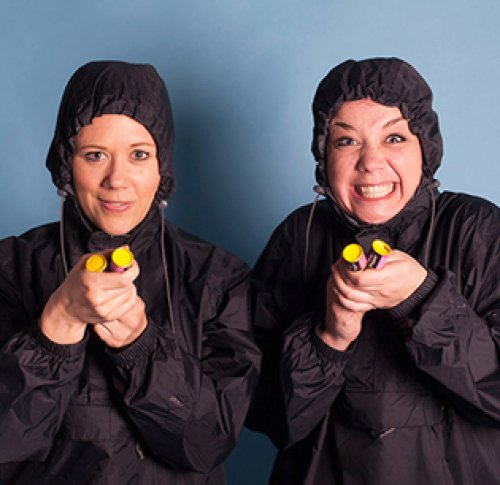