Peter Morey is The Live Scriber. He illustrates the words of comedians such as Al Murray, Tony Law, Marcus Brigstocke and Phil Kay, turning their thoughts, quips and comments into inter-connected, quick-fire cartoons.

“My show is called Doodle-a-thon-edy! and I am also artist in residence at Heroes of the Fringe. The show isn’t really a show, but a format for a show. I create a live mural of cartoons in response to guest performers while Bob Slayer stewards the whole thing. We draw on people’s hands and invite them to join me in my doodle-trance as they enjoy the comedy. Selected audience members will have a dedicated space on my mural, and they will also be given paper plates on which they doodle what they like during the final act of the show.

“The main idea is that you can listen to things – and sometimes listen better or more actively to things – as you draw. This not only provides you as the doodler with a fresh perspective, but also generates interesting images. By sharing these images in my scribes, I am trying to engage with and communicate the atmosphere, imagination, ideas and moods present in the room and in the moment.

“Another fundamental idea is that everybody can do this – everybody can access this way of listening or processing things – if only they drop all inhibitions and simply draw without prejudice while something is going on around them. So there is an inclusivity message too: this format is a way of bringing performers and their audiences closer together.”

“Apart from my show, I am artist in residence at Heroes of Fringe. I will be present at all Heroes shows, creating one surreal inter-connected cartoon per performance, throughout the Fringe. These drawings are called ‘scribes’, because I am ‘The Live Scriber’. I hope that the scribes give fresh, lateral and energetic reports of each show. But above all, I hope that they capture the imaginations of the audiences and performers, and translate a medium which is inherently of the moment into a lasting and interesting picture.

“Audiences are free to watch me draw, which is a performance in itself, and they can re-live each show by looking at the finished pictures. The scribes will be pinned around the Bookshop as I go so they decorate the venue, and both the originals and prints will be for sale as they happen.

“I will also be selling my comics, zines and screen-prints at the Bookshop. So it’s something of a full-scale assault this year.”

“I wouldn’t call it comedy. I’m a ‘live scribe’, which is a kind of artist. But if pushed, I would say that what I’m doing is akin to improv – in fact, it’s visual improv. I listen for interesting images, figures of speech, metaphors, innuendo, puns, etc, and draw them, very quickly and publicly.

“I like it when images and words from distinct parts of the show/s link up in surreal ways on the page, and sometimes I like to deliberately miss-hear things in my drawings. So there is an element of chance which brings in new meanings. These are sometimes funny, sometimes weird, sometimes dark, and sometimes meaningless or flat. Whatever they are, they tell a story of whichever show they were drawn at.”

“Shut the Fuck Up and Draw!”

“I have no idea. I’d probably start with Bob because he’d like me to say that. He can choose the rest as long as they all let me draw knobs on their foreheads.” 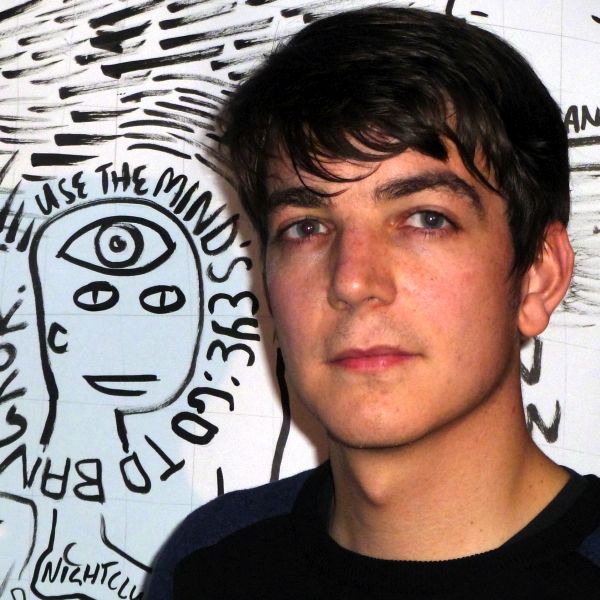