Having trained and performed at many of Chicago’s most prestigious acting schools Cynthia Levin moved to Los Angeles where she began performing stand-up comedy. Today, a seasoned, edgy and hilarious performer as both an actress and a stand-up comic, Cynthia brings her comic creation, Linda Lovin to the Edinburgh Festival Fringe.

“My Edinburgh show for 2014 was something that just had to be done because of all of the fan mail I was getting from the United Kingdom. So, my manager said, ‘Go! You’ve just got to go!’ So, he let me go mid-way through the breakfast shift and I headed home to pack up my sexy and almost forgotten about evening dresses!

“A bit about Linda Lovin and the show. I used to spend most of my nights entertaining the masses at Whiskey Pete’s Casino just outside of Las Vegas, though all the while dreaming of being table side at a diner somewhere, anywhere! Anywhere but singing and dancing for overly anxious fans. But that dream wasn’t meant to be. So, to satisfy us all, I will be singing songs of the 70’s – the only era for music if you ask me – as well as some other surprises for the UK audiences, fighting with my piano player – he’s one of many ex’s – and giving tips about customer service as this country seems to be needing desperately! I will also be having guest performers on so I can take cigarette breaks and use the toilet.”

“Their talent scout spotted me while working at a Waffle House. Well, I don’t want to brag but not just any Waffle House, The Waffle House! So, between that gal Renata from Freestival luring me with money, the fan mail I was getting and my manager being so supportive or… anxious for me to leave – my mother thinks. I decided to take off my apron, put on my gown and prepare for a trip to Edinburger!”

“Being a waitress at The Waffle House is my calling! Being a stand-up comic/actress/singer/dancer was just something to fall back on – that was my mother’s suggestion. She said ‘You’ve just got to have something to fall back on!! You’re just not a good enough waitress!’ I do try to stop performing but as you can imagine, my fans keep dragging me back.”

“Linda’s never gone too far because luckily Linda has never actually been held in a cell for more than a fortnight. I’ve gone through multiple piano players and only eleven of them have pressed charges. So, I’d say I’ve continued to do my part to live within the bounds of reason.”

“First of all, I have to say that the problem with stand-up comedy on TV is that it is too sanitised and safe. Who wants to watch shit where nothing is at stake?! I know I don’t! Those comedy shows are ridiculous! Well, here’s bla bla doing bla bla, next is bla bla doing exactly the same bla bla! So predictable! The great thing about live TV is that anything can happen and it should as it will on my TV show because nobody gets away unscathed!

“My show will be full of risk, chaos, and anarchy. I like the acts that are less concerned with their posture and more concerned about entertaining! I am a big fan of that fella from Norwich, Alan Partridge. I think Steve Coogan based him on my first husband Howard. He had terrible posture. I’m still waiting for my royalty cheque Steve! And I’d also have the improv quintet Racing Minds on my show. I like them so much I even loaned them my piano player Dylan Townley! Check them out. (see link below).

“And I’ve worked with loads of great female and male acts in London, Dublin, New York, Chicago, Los Angeles and Fort Woody, Missouri and some of them are still talking to me. I’d stick them on. You may have to go on the casting couch boys – I’ll meet you in the bar after my last set.” 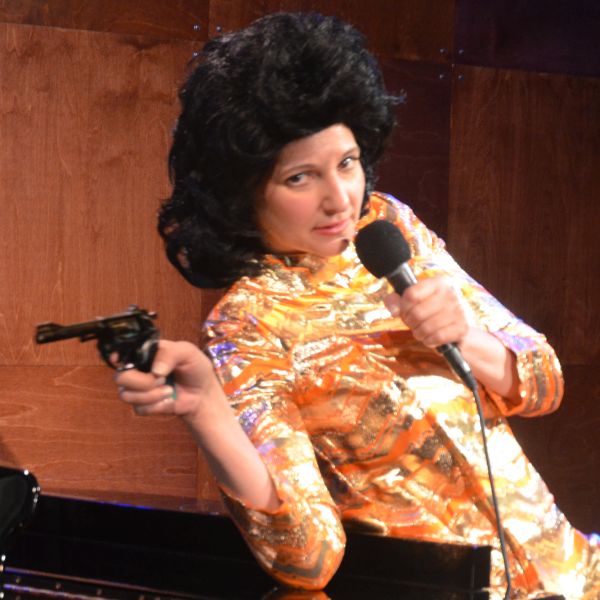