My show is called Match. It is my first ever solo comedy show and I am bringing it all the way from Barcelona… to make life difficult for myself! The show is a crazy romp of a show about dating over the past 100 years. It is a totally interactive show where we will recreate Blind Date on stage with members of the audience, I will chaperone a date as an old, smelly Irish granny, and of course I have to involve blow up dolls, plastic roosters and projected news reels from the 1940’s about how to get prepared for a date. The show is a mixture of clowning (in the modern Dr Brown, Paul Currie sense) and stand up, with a huge dollop of improvisation. I hope that it will be both entertaining, interesting, hilarious and eye opening. We think that our generation finds it the hardest to find a real love- match with tinder, plenty of fish and match.com making increasing the pressure to be perfect and beautiful, but every generation has had things to contend with- most of which are hilarious when clown takes a look at them.

My first stand up comedy gig was kind of a mistake. I had been working as a clown and had a double act with my partner Filipa for years that we had been touring around Europe. We were booked for a gig and she cancelled on me fairly last minute, so I went to meet the producer of the show and tell him I was sorry and I could not perform without my partner, sorry, sorry bla bla…. Once I sat down he started telling me how angry he was that two comedians had pulled out of the event… so I decided ok- I better write a strand up set and make up something and go and perform it. I had never performed solo before. That set of 10 minutes is actually still going to be part of my show at Edinburgh. So, turns out being under pressure was a great thing for me, apart from the fact that I wore a grey t-shirt and I sweated all through the set!

I have a bottle that I blow bubbles into.

Best review was in New York. The owner of the PIT Theatre told me he loved my show… that was wonderful. “Two of the most talented, exciting and interesting performers I have seen in a very long time. I was thoroughly impressed. (the show) Is performed at the highest levels of Lecoq-style clown that I’ve seen in a long time” Ronny Pascale, Artistic Director @ the PIT NYC. I was so thrilled, I had always wanted to perform in NYC, and to get a review like that afterwards meant the world to me. The worst was a 1 star review from a work in progress show that I took to London festival several years ago. I agree with what they said in some ways, as the show had very little preparation and was rushed together- but they called my puppetry juvenile – I mean it was supposed to be childlike but still taken seriously, so that stung a bit!

Yup, I wish I could say that I was super cool and aloof – and laissez faire – but no.. I am not. I will read reviews, and then try and forget them… unsuccessfully, and then a good one will hopefully come out and I will forget all about any bad ones that I read beforehand until the next strange comment appears somewhere.

I think they are part of the fringe. I think it is important to take reviews about oneself not to personally and to try and look at things objectively so as not to get too wrapped up and competitive about things. But who are we kidding, Edinburgh is a huge trade show… we are there to bring our show to 1000’s of people at once, and we are all trying to get noticed in a big pile of sparkly people all trying to get noticed.

I don’t think it was worth being fined for, and that people have the liberty to say what they want. But perhaps it was not the best idea. although following the adage that ‘all publicity is good publicity’ here we are talking about him several months later. On one hand I am impressed that he could do that and that his girlfriend allowed him to mess up his dog’s brain, on the other hand I can see that people are sensitive about it too, I have to say I am on the fence about it. But I do not think it is a criminal offence.

I think everything can be touched upon, but that we have to be sensitive to a certain amount towards what we can say. I think it is good to shock and offend people occasionally, but not make people feel so uncomfortable they go home crying about the decisions they made in their lives. . Comedy for me at its heart is about trying to make people think, laugh and to connect things in their brain that perhaps they had never thought of in the past. I think it is good to shake up our overly PC opinions and feelings occasionally. Nowadays, everyone feels they have the right to be offended by something- sometimes we can wrapped up in this overly sensitive warped view of the world- it’s good to let go and have a laugh as well. But I live in Spain, where people don’t get offended so easily, and casual racism seems to be ever prevalent in all levels of society- and that shocks me.

Yup.. once I went left instead of right and walked 1000 miles before I realised that I had gone too far.

I think my best gig ever was when I was performing in Toronto with my comedy show Alpha Delta 86. We had been touring for a while and our show was about love being banned in a post-apocalyptic world (love is definitely a current theme through all of my shows) I brought someone on stage to ‘scan’ him for love and I found a beautiful watch. I told him it had to be confiscated because it was given to him by someone he loves. He said it wasn’t a ‘loved-up present’ and then his wife stood up in the audience enraged, shouted that she never loved him anyway and took off her wedding ring and threw it at him. They got so involved in the concept of the show that they got divorced live on stage. It was a wonderful moment for me, I had created an absurd world and the audience whole heartedly came along with me, delved into the madness that I had created and relished in it, to the point where they allowed themselves to do things that they wouldn’t do normally! Brilliant moment for me. I mean that… and the fact that they gave me a huge standing ovation at the end- I mean, that always helps. 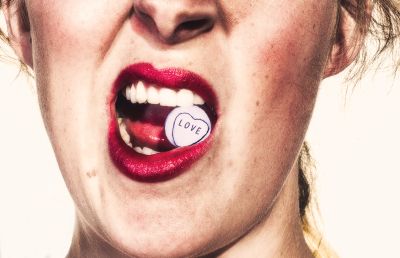