Never work with children or animals. Never use Facebook when you’re drunk. And never launch a magazine about comedy. Pretty much accepted wisdom, so why are  Danielle Gilbert and Ian Wylie breaking the third rule, when the graveyard of magazines is full of dearly-departed comedy launches?

So what’s your ‘great new idea’?

“Well, while we’ve enjoyed some of the magazines about comedy that have gone before, we have yet to find one that attempts – successfully – to marry comedy with high-quality design, illustration and journalism.”

You must really care about comedy.

“We love comedy. We love journalism. We love magazines. Stand and Deliver will be our expression of these passions. A beautifully designed, illustrated and written independent print magazine for people who understand and enjoy comedy as an art form. A grown-up conversation with the men and women of comedy about how and why they make us laugh.”

“These are exciting times for comedy. Stand-up is pushing out the boundaries and becoming ever more experimental. Innovation is at work in small clubs up and down the country every night of the week and Stand and Deliver will explore the possibilities of print to report and explore from the cutting edge – offering readers an intelligent, alternative view of comedy.”

So what’s different about Stand and Deliver?

“The magazine will focus on celebrating comedy by getting under its skin, through a mix of features, interviews, storytelling, photography, illustration and design. We admire comedy that doesn’t just make us laugh, but engages our intelligence too. Comedy isn’t created or enjoyed in a vacuum, so Stand and Deliver will follow the threads that link comedy to our wider culture, from food, science and literature to feminism, politics and religion. Stand and Deliver is a magazine about comedy… but we’ll leave the comedy to the comedians.”

Who will produce it?

“We’re sourcing our content from a wide range of collaborators: from comedians, and fans to professional journalists, photographers and illustrators. We hope to appeal to a broad audience whilst satisfying the curiosity of a niche readership that appreciates alternative comedy outside the mainstream spotlight.

“The design of each issue will be inspired by a comedian and the content of the magazine will be organised like a comedy show. Our cover comedian will be the headline act and showcased at the end (of course). Our interviews and profiles will perform as support acts, all compered by our team of editors. Our cover comedian will influence design throughout the magazine, from icons and headlines to illustrations and custom typefaces.

“The editorial team behind Stand and Deliver is stuffed full of experienced writers and editors who work for, among others, the Guardian, Telegraph, Sunday Times, Financial Times and Economist. And yet Stand and Deliver is highly experimental – well… what else would you expect from a magazine about stand-up comedy?”

“We’re printing and publishing just 1,000 copies of our first issue in August 2014 – all on handsome, sweet-smelling offset paper. Kickstarter backers can choose from a wide range of extra rewards that include first issues signed by Tony Law, Stand and Deliver tote bags and limited edition copies of our “Issue 0” poster.

“We don’t expect to be the first or last word on comedy. We’re not trying to steal anyone’s business or slice of the comedy pie. We’re confident we won’t be everyone’s cup of tea. We just want to take our chance of creating something of which we can be proud while sharing and exploring our passion for an art form about which we care a very great deal.” 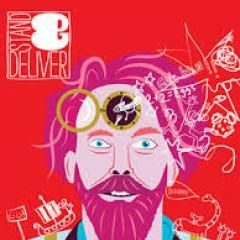