Martin Walker talks to Neo Futurist, Ryan Good – AKA Ryan the Bisexual Lion – who has surveyed the sexual habits of the animal world. Spending over a year researching in the Peruvian rainforest, the Galapagos and the wilds of San Francisco he finds gay penguins, monogamous albatrosses and polyamorous coffee mornings.

“Sex With Animals is an expedition through the worlds of sex and love that all animals experience, especially our species. I wrote the show by traveling around the world interviewing zoologists about the sexual habits of the animal kingdom and then by doing some… let’s just call it “research” on the habits of the human kingdom in San Francisco. I learned that we are all animals too – confused, loving creatures who make ridiculous faces when we orgasm.”

It was a massive hit at the Edinburgh Fringe – it’s been to Australia and now you’re taking it to London and Brighton. Has the show changed much since the start of the original Edinburgh run?

“Actually, probably about 25 percent of the show has been re-written. I got many tips on animal sex and love from audience members which I wanted to work in, but I also had people who saw the show and then wanted to talk to me about their relationships. I guess my show’s openness made them feel like they could be open with me. I learned a lot about people and I wanted to work their ideas into the themes of the show.

“Oh, the other thing that has changed is the show poster has more stars on it (like the five from Broadway Baby) and a commendation for Best Comedy at the Adelaide Fringe. (No one ever said lions are modest)”

What is a Neo Futurist?

“The Neo-Futurists are a theatre company with chapters in Chicago, New York, and recently San Francisco. I have worked with the Chicago and New York companies for 9 years, and was just this past year a founding member of the San Francisco chapter. Our ethos is that we create work that involves truth on stage – so it’s not all about big sets and characters and other pretence.

“Our staple show Too Much Light Makes The Baby Go Blind – 30 Plays in 60 Minutes – will be at Edinburgh in Underbelly this year, so look out for that one.”

Would you describe yourself as sexually liberated?

“Yes and no. I’m certainly different from a lot of people in my non-monogamy, etc, but I struggle with the same things we all do – jealousy, balancing life and relationships, and where the damn condoms went. I hope I have an open mind to doing things differently in the ways of love, but sometimes I just want a boring snuggle like everyone else.”

If you were asked to put a TV show together who would be your guests?

“Probably the whole cast of Mad Men, but they’d all have to be dressed more shabbily.

“Failing that, I’d probably just want a bunch of the most exciting Edinburgh performers and put them in a house with me – Daniel Kitson, Bryony Kimmings, Sam Simmons, Thom Tuck, Adrienne Truscott, and Dave Callan. It would be the greatest and weirdest reality television show of all time.” 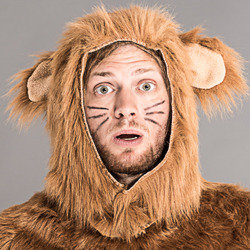