We were having a bbq last year and it got really out of hand. Pete kept losing the tongs. We resolved the deep conflict this created by engineering not only the world’s first automated kitchen, but the world’s first tongless one.

We had a lot of equipment to set up. And one man in the pub wanted to watch the world cup, ruining the gig. Football would continue to ruin many more gigs to come.

If we remember we’ll eat a banana.

The best ones have proper sentence structure. We’d like to be sent reviews before they’re published. Not to see if they’re slagging us off, just to proofread them for grammatical errors.

The star system is a bit naff. It doesn’t take into account the reviewer and their personal preferences; ideally you’d read reviews from people whose interests are akin to yours and go from there.

Although we’ll take the stars. It’s an arms race.

We opened by putting a motion controlled baseball cap on an audience member’s head. Rotating and tilting their head controlled where the virtual robot looked in a cubed rendition of the Royal Mile. It worked in our heads, but not on theirs.

It takes us two hours to set up and one hour to break down. So while other comics are having crazy nights out and becoming industry friends, we’re busy cleaning beans off an air compressor. 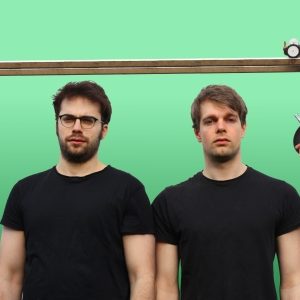