“You know, it’s the usual schtick.”

“Laughing Horse has a proven track record of delivering highly well-run comedy shows. They also help you along the way so I’m very glad I picked Laughing Horse.”

“You mean, how would I describe it to my family? Well, let’s see: ‘Don’t get upset! It’s all just a joke! I know granddad wasn’t well!’ Disclaimer: he was fine. And I loved him. So it’s okay.”

“Plan A: I would do everything in my power to get Woody Allen, Larry David and Steve Martin to return to stand up i.e., I would tweet at Steve Martin who is the only one of the three on Twitter…

“Plan B: I would round up a selection of the best comics from Israel and Palestine. TV ratings would soar and intolerance might ever so slightly subside. It’s what they call a win-win situation. Or a ‘win-semi-win’ situation.” 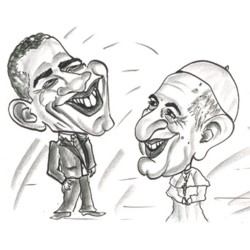