Tom Deacon has been performing live stand-up for the last six years and has been the host of his own TV, radio and online shows on BBC2, BBC Radio 1 and YouTube football channel Copa90. Martin Walker asks Tom about his latest Edinburgh Festival Fringe show.

“Where to start… Well, this is my forth Edinburgh solo Edinburgh show and I’m most excited to have an audience to see this one, as it’s my best one yet. It’s called Get Your Deac-on and I promise that it’s not rude! It’s all about the last year in my life, so you get your dose of Deacon for sure. It’s about my Life, Love, Lust, Lessons, Laughter, Let downs and other important things. To put it simply, it’s me doing what I do best; stand-up comedy.”

“Laughing Horse captures what the Fringe is all about to me. The Fringe has always been a magical thing to go to as a punter, worker and performer. The fact that you don’t have to pay a fortune to go and see a show, that you have no idea what it’s going to be like, is a brilliant thing for the Fringe. To me that’s what the Fringe is all about. It’s far too expensive to perform year in year out, especially if you have some grand plan in your head. Mine is simple. I’m a stand-up comedian who wants to perform in front of as many people who want to see me as possible. If they want to leave some money in the bucket at the end to help cover costs because they enjoyed it then I’m chuffed. That’s why I’m performing at Laughing Horse.”

“I always loved watching stand-up comedy, it made me laugh, obviously… but because it did, it made me feel great. Watching an audience laugh as one is a beautiful thing and to be part of it is even better. My friends always thought I was mad to want to be a comedian, they said I wasn’t funny enough… oh how I laughed when they said that… so I started when I was at university at a local comedy club in Exeter. Since that moment I’ve been gigging every week for the last eight years, making people laugh.”

“Let’s start with the worst, I’ve had to leave the stage as the gig was unplayable once in Cambridge, I mean Cambridge of all places. Just because I said tomaito instead of tomato. But, gigging for the last eight years has given me some awesome experiences, I got to travel to Australia to perform, Denmark, Canada and Luxembourg… I mean I didn’t even think that was a real place.

“I’ve performed in front of thousands of people at Latitude and Leeds & Reading festivals, performed on the same bill as some of the biggest names in comedy. The journey is still continuing and that’s the best experience in my opinion.”

“Chris Ramsey and Jimmy McGhie. They’re my mates, I lived with them and if I had to do a stand-up TV show, I’d want people around me who make me laugh offstage. Too risky to work with my comedy idols… what if we don’t get on?” 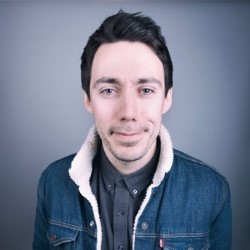