For his Edinburgh Festival fringe show, the award-winning gag merchant Masai Graham delivers over one hundred jokes in just half an hour. Expect puns, one liners and wordplay in this 3.3 laughs per minute bonanza. Martin Walker meets a very funny man.

“Hi, I’m Masai Graham and My Edinburgh Fringe show is called Aaaaargh! It’s 101 jokes in 30 minutes. I can’t really say what it’s about at the moment; it’s a bit of a secret so I don’t want to give anything away.

“Yeah I do one-liners, puns and wordplay, some cheesy, some dark, some clever but all funny, a bit like Jimmy Carr but when he was good. I’m joking again.

“Aaaaargh, It’s 101 jokes in 30 minutes is theRonseal show of the Fringe, it does exactly what it says on the Tin.”

“I was writing jokes as a hobby in 2010 with no intentions of being a stand up and my friend alerted me to the winning joke of the Edinburgh Fringe that year and suggest I enter some of mine. My First thought was ‘What’s the Edinburgh Fringe?’ I then realised you couldn’t just enter a joke and you had to be an actual stand up to be recognized, I did my first gig in London and it went so well I’m sure that confidence got me through my first 100 gigs until I got to grips with the whole circuit, but you never stop learning. If that first gig would have gone bad I probably would never have done it again so a lot of it’s down to chance and circumstance, like all things in life.”

“Jeez, my worst ever gig would have to be one of my first try out spots at a big club around 3 years ago. The MC introduced me as being from West Bromwich, a drunk Wolverhampton Wanderers fan in the audience decided to shout out ‘come on the Wolves!’ after every joke, then halfway through each joke, then after every other word, that 5 minutes seemed like an eternity, I still have flashbacks about it now but I can’t afford the counselling.”

“My best gig would have to be my first ever gig at the Lions Den in Kings Cross, London. Each act paid £4 and had 5 mins. As i’d never done it before I read my one liners off a card and they loved me. As I left the stage 2 audience members stood up to shake my hand, I was in such a daze that the next person in front of me had his back turned, I tapped him on the shoulder, he turned around and I shook his hand and said ‘thank you’. I walked away that night thinking ‘What’s ITV’s phone number? I need to let them know that I’ve landed.’”

“I’d have a one-liner fest to be honest with you, Milton Jones, Anthony Jesselnik, Gary Delaney, Stewart Francis, Tim Vine, The Spirit of Bob Monkhouse and Jimmy Carr when he was good… I’m joking again. I think Darren Walsh is an amazing up and coming gagsmith too, a very talented and creative writer. As a host I’d have Shola Ameobi so I could talk about all the goals he scored for us against the Mackems, the tap in against Barcelona, the Hatrick against Reading and his episode on MTV’s Cribs. He had a shower which had shower heads on the sides as well as overhead so you get sprayed with water all over! Genius!” 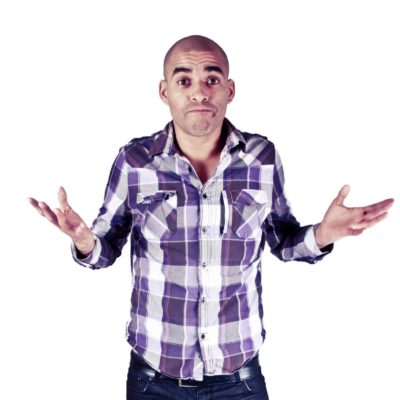