“My show is about my best friend, which is my dog Kevin. It’s about love and abandonment but mainly it’s about picking up an awful lot of dog crap.”

This is your first solo stand up show in Edinburgh. Why now and how do you feel about it?

“I feel nervous and excited. Kind of like when you go on a date. You don’t know what to expect, they may not turn up at all, at least you’ll have a story but ultimately be out of pocket. I’ve done a double act before and a showcase but never an hour so I thought the time was right to write. See what I did there… I’m so sorry.”

You began performing in 2009. For you is stand-up comedy a career or a calling?

“It’s both I think. It’s not a career in the traditional sense in which you get pay increases, office perks, I suppose I still get to talk about other members of staff in the break room – the car. Its definitely something I want to be doing for a long time. Previously I’ve never had a job I wanted to stick at past 5’oclock.”

You live in the great city of Manchester. How much does living there inform your comedy?

“I was brought up in Connah’s Quay in North Wales and the most interesting thing to happen there was they once posted an arial view of Connah’s Quay on the front page of the local paper. I’ve lived in Manchester for about 15 years and it has a brilliant comedy scene and full of brilliantly funny people. A lot of my stories now revolve around the people I have met in Manchester and include no stories of Arial maps.”

“This is a tough one, I’d have Ed Gamble and Ray Peacock as joint MC’s, Roisin Conaty to open, Danny Sutcliffe, Brennan Reece, Liam Bolton in the middle and Sarah Millican to headline, ooh and Kanye West – he’s brilliant at comedy – plus Sam Brady as ‘his stand up show Kindness is just brilliant.” 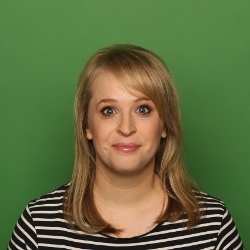