It’s the show where I, Edy Hurst, bring together all the 125 years of remakes, reboots adaptations, rips-offs, and multitude sequels of the 1897 sci-fi classic the War of the Worlds into on comprehensive, definitive version of this tale of Martian Invasion. In under an hour. With the resources of a school jumble sale. Finally!

War of the Worlds is this cultural artifact that people just won’t leave alone. It’s been everything from a disco rock opera to a very strange ‘70s Marvel comic to even the basis of Space Invaders. There’s Death, Taxes and War of the Worlds. Maybe it’s the hyper focus of ADHD alongside processing the trauma of a world locked down by, surprise characters in the actual story, germs, but I’ve been unable to escape these countless re-tellings of weird drum headed creatures causing a menace on earth. Well, no more I say! A problem shared is a burden budged, and I’m passing on my curse to you.

I started loosely making this show in 2019, a time when the very thought of germs effecting the world in a significant way was completely laughable. But look at us now! Does the show have a surprisingly prescient additional message about the state of the world we live in? Will I successfully skewer and celebrate our current cultural obsession with remaking pre-existing source material? Will I claw back some of the costs from ordering a tape cassette of Orson Welles’ reading the War of the Worlds from Australia despite not owning a tape player? I sure hope so!

I love the City of Edinburgh. It’s got a castle which is always comforting in case of Saxon invaders, a healthy amount of stone buildings and Pandas at the zoo. If you want more than that from a city, I think that’s on you.

The attraction of the Edinburgh Fringe, like the best Fringe festivals, is that you’re bringing your show to a place where people are willing to try new, exciting things and see some of the best live shows in the world. I’ve watched some truly life changing performances here, as well as performing in some of the most fun shows I’ve ever been part of.

Also it’s a chance to get to spend time with other comics, as so often throughout the rest of the year you’re always travelling from one place to another.

I think that rightly so there are big conversations happening about the costs of the Fringe for performers, from accommodation, to room hire, to unseen additional production costs such as promotion, flyering and affording to eat/ buy those little bagpipe magnets. I really hope that changes start happening, it’s an incredible experience to be part of and there’s already so many things beyond money that make it hard to have a part in the arts. Look at me saying ‘the arts’, who do I think I am? Someone not making Martians out of tin foil, PVC pipe and plaster of Paris?

Now this sounds like I might have to be sincere and earnest, which, quite frankly, no thanks.

Well, ok, but just a little.

I really love and I’m inspired by people finding new ways to look at the world and at performing and making things. I recently starting watching Joe Pera Talks with You and that was just wonderful, a sort of meditative, ridiculous and sincere sitcom about a man trying to find some sort of meaning in the world.

I’ve always loved Michel Gondry’s use of lo-fi props in films like Science of Sleep and Eternal Sunshine of the Spotless Mind and it showed me how just because something’s made from cheap materials doesn’t mean it’s not got value and meaning.

Jeff Wayne’s Musical version of the War of the Worlds also deserves mention for the show. He made an arena selling out show based on a Victorian Invasion of Woking! But regardless of the commercial success, making something so big sweeping and legitimately compelling from a bafflingly niche subject matter is just great. Good for him. Lemme on them coat tails daddy!

Specifically with this show too is all the many, many, many, many different versions of The War of the Worlds people have made. It’s such a relatively simple story that everyone seems to find a new angle, outlook or telling of, whether with no budget or big production teams behind you. There are passion projects made in people’s homes to blockbuster films, and there’s something inspiring in that no matter how much you think a story has been done, someone can come along and completely change the way you think about it.

Ahhhhh there’s so many! I’m going to miss someone off and hate myself for weeks! There’s loads that I’ll have missed, but I hope that if people like my show/ are interested in it then there’ll be some overlap with these folks!

Every time I see them, they’re big, daft and have an infectious energy you gotta get on board with! Check them out as they spread their wings in their fledgling debut.

I’ve performed with the Sausage for years, and every time I see them they get. Even. Better. I saw their last show in Manchester and if that’s even a slither of the new show, mamma mia, I can’t wait to watch this disgusting nautical nightmare.

Also check out their solo shows, Chris Cantrill: The Bad Boy & Amy Gledhill: The Girl Before the Girl You Marry

Luke’s as wildly inventive as he is wildly haired. Which is very! He’s been trapped in his house for the past year and a bit, no idea why(!?), and I’m very excited for the finest use of kitchen utensils you’ll see at the Fringe.

As well as being very funny, Jen also takes little to no shit from idiots, challenging the transphobia that unfortunately seems to be on the rise with, most importantly for a comedy show, with hilarious jokes and activism.

She was also kind enough to come on my War of the Worlds podcast and help decide which extra-terrestrials were trans icons. So I get to be a gross little lad and promote my own show here like a nasty goblin.

Wait Delightful Sausage were on it too I need to go back and write it there.

Freddie is a puppeteer and performer that is finally bringing the story of Dr. Faustus to the Potato community in all its magnificent splendor. Bake away!

The many other War of the Worlds Shows at the Fringe!

There’s even another one with a low budget, is nothing sacred!?

Absolutely not! Life is an empty void and we’re lucky to exist for a fleeting moment!

Go watch them all then see mine, because I’d hate for you to miss out on sweet Martian invasion once I complete the whole thing.

Why is there no such bird as a Seagull?

I think it’s because there’s not a specific species of bird that is a seagull, it’s more of a catch all term for gulls that live at the sea? I’ll be honest, I don’t really know much about gulls or ornithology and it seems weird to ask me about it.

I guess the main thing regardless of the science in it is that the language we have is what connects a shared meaning that creates our understanding of seagulls. What a seagull is is something unique to each person’s experience with gulls and the sea, and whilst there are so many different versions of what ultimately is a seagull, there’s value in each person’s interpretation of that. Whether that’s a passion project made at home, or a big Hollywood blockbuster.

Does it feel like we’re obsessed with putting a definitive version of a seagull into the world? I think it’s really easy to get bogged down in that, but it’s also an opportunity for us to live with a shared experience.

But regardless, you do want to be careful with your chips on the coast, because whether it’s a European Herring Gull, a Yellow Legged Gull, or a Common gull, they are all absolute food nabbing bastards. 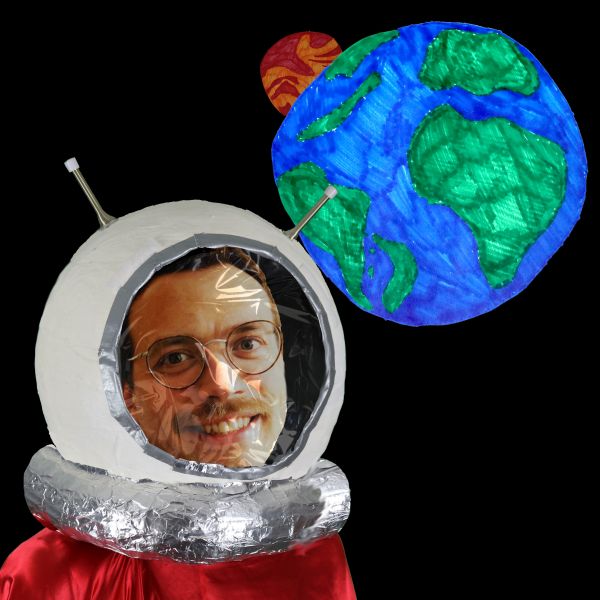