Morgan & West have two shows this year. Return of the Time Travelling Magicians is all their best magic tricks from the last ten years of doing shows at the fringe. More Magic For Kids is their popular kids show.

Mr Morgan and Mr West. Tells me about your Edinburgh doings.

We’ve been doing magic on the fringe for a decade now, so we’re doing a best – of album. Except it’s a show not an album.

Too many inspirations to pick one, but if forced we’d say Eddie Izzard. No, he’s not a magician, but he works hard, carves his own path and produces great work time and time again.

We’re associate members of Wilton’s Music Hall in London. It’s a building steeped in history and doing our shows there is always a delight.

Every now and then we get presented with some fan art made by one of our audience (usually but not always children). That’s the best review you can hope for.

If you weren’t performers, what would you be?

Teaching in secondary school, which is genuinely a wonderful job.

What were the last books you read?

What’s the capital of Ghana?

No idea, Geography was never my strong point.

A shot for shot remake of the Twilight Zone episode “Nightmare at 20,000 feet” where Mr Morgan plays the role that Shatner played, Mr West plays the Gremlin and every other part is played by William Shatner wearing a 1984 Gremlins movie T shirt. This is why the BBC never ask us to make anything. 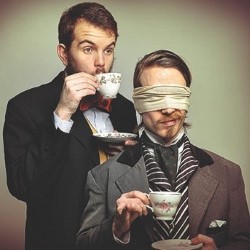