In James Veitch’s 2014 Edinburgh Fringe show, The Fundamental Interconnectedness of Everyone with an Internet Connection, he investigates scam emails, distant princes, unclaimed inheritance and close friends marooned in a foreign country. Standard procedure is to delete on sight, but what happens if you reply?

“I’ve spent the past year responding to as many scam emails as I can. Packed full of Nigerian princes, can’t miss investment opportunities and eligible Russian brides, my correspondence leads to surprising, bizarre and usually hilarious results.

“Through my own blend of traditional standup, interactive projections and original music, I take the audience on a journey through the schemes. We investigate the nature of scamming; examine its role in our connected world; and explore my own psyche, as I try to understand why I find pushing these cyber con artists to their limits so very satisfying.

“Quirky, fast-paced and relatable, it’s theatre for the modern world, a show for anyone with a dream… and an email account.”

Describe your act to those who haven’t seen you before.

“Basically I black up and dance around. ‘I’ve never felt so uncomfortable in all my life’ – The Guardian.

“I’ve been described – I can’t remember off-hand who by – as a young Woody Allen – before the controversy. I’m quite fast and a bit dishevelled, I suppose. I was once a Genius for Apple so if the gig starts to founder, I can always fix your iPhone.”

“You know what, I don’t think I’d have anything to say. I’m not sure I believe that wisdom comes from experience. I’d be more interested to hear what 17 year old James had to say about life and love and ambition. There are things I knew to be true then that I find it hard to imagine now.

“Ah, youth. Keats said something I’ve always loved: ‘Some think I have lost that poetical ardour and fire ’tis said I once had – the fact is perhaps I have; but instead of that, I hope I shall substitute a more thoughtful and quiet power.’

“Oh and invest in Apple when it’s seven dollars a share.”

On balance, is the internet a good or a bad thing?

“The internet merely is; it’s happened and we can’t go back for the horse has bolted, the rabbit’s re-appeared, the cat’s out of the bag. It’s like people who yearn for vinyl and teletext and lickable stamps. Bless them but what’s the point; they’re not coming back.

“The internet is, like much of life, full to the brim with uncertainties. On the one hand it’s allowed a doctor in Dubai to perform a life-saving operation on a patient in Peking. On the other hand it’s also allowed me to enrol a gerbil at Eton. I’m not sure where I stand is basically what I’m saying.”

“I’d want Bill Cosby just because he’s still alive and it would be a bit of a coup to get him. And I’d get Paul McCartney and Damon Albarn to write a song especially for the show. I’d definitely like John Mulaney and Mike Birbiglia but I’d only give them fives or tens because I wouldn’t want them to show me up. I’d probably give Kitson a spot if he asked nicely. And Woody Allen who must get back into standup.” 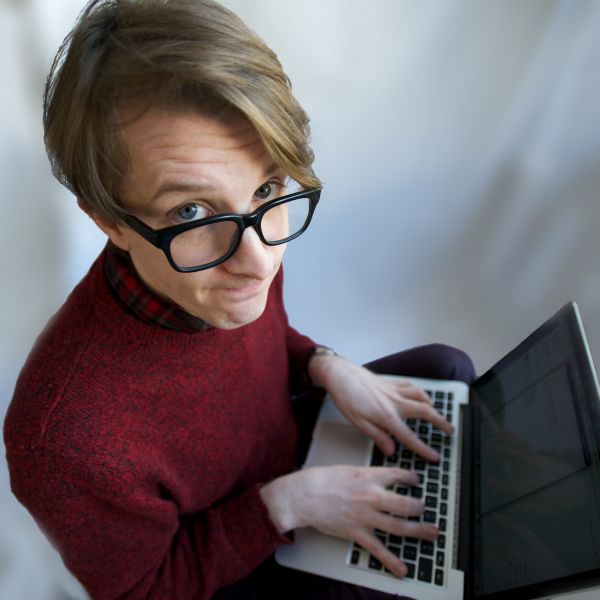