When Jim Davidson me andrew Doyle

Jim Davidson is the first to arrive.  ‘This is my favourite restaurant in Edinburgh,’ he says.  He’s only had three hours sleep due to an appearance on breakfast television and is looking forward to a decent meal.  He knows what to order immediately because he has kept a photograph of his favourite dish on his mobile phone.  We order some starters while we wait for Andrew Doyle.  That day’s performance of Outings, the play about coming out as gay which he’s in, has only just finished, so he won’t be with us for a little while.

‘I’m at home around gay people,’ Jim tells me.  ‘It doesn’t surprise anybody who knows me that I fell in with a gay crowd here in Edinburgh. The gay mafia.’  He is alluding to his recent night out with a group of gay men to a well-known performer’s bar.  ‘It was funny,’ says Jim.  ‘I’m an old-school right-winger, and there I was drinking with a gaggle of gays.’

Of course, this is precisely the kind of phrase that is likely to get Jim into more trouble.  I ask him why he doesn’t feel it necessary to modify his language when discussing minority groups.  ‘Because they’re just jokes,’ he says.  ‘I’m not homophobic.  A lot of the language I’ve used on stage about gay people has come directly from my experiences with gay friends.  I can see how it has a different connotation when said by a straight person, but there’s no malice there.’

Right on cue, Andrew arrives.  He hasn’t eaten yet today so is quickly dipping into our hummus.  ‘There’s no meat in this, is there?’ he says, having already scoffed a hefty mouthful.  As far as vegetarians go, he doesn’t seem all that cautious.

Andrew mentions the night out with Jim.  ‘It was a revealing experience,’ he says.  ‘Jim was getting a fair few scowls from certain performers.  Friends of mine took me aside and asked me what he was doing there.’

‘I felt like I was behind enemy lines,’ adds Jim.

Andrew’s new stand-up show is all about the subject of intolerance.  It includes a set piece about the ways in which language can be misconstrued and how he was accused of being homophobic by a couple who didn’t realise that he was gay.  ‘I’m militantly pro free speech,’ Andrew says.  ‘I think the price we pay for living in a free society is that people are going to say things that we don’t like.  I get offended by things all the time, but that’s my problem.  Being offended doesn’t give you the right to stop somebody from expressing their views.’

Andrew has joined us partly because he hopes to persuade Jim to appear in Outings.  In addition to the show’s core cast (Andrew’s co-stars are Rob Deering, Zoe Lyons and Camille Ucan) there is a different special guest for each performance.  The producers had approached Jim months ago about the possibility of him appearing, but he had turned them down.

‘I would really like to do it,’ Jim explains to Andrew.  ‘But everyone will say that I’m just trying to make a point.  It will detract from the piece.  I wouldn’t want it to get any flack because of me.  Anyway, it would look like I’m trying too hard.  The press are going to say that I’m just doing it to get approval.’

This surprises me.  Jim strikes me as very aware of how he is perceived in the media.  He’s been reading his reviews over the past week, and I am surprised at how much he seems to take them to heart.  ‘I had one really bad review and the critic accused me of having material that was “engineered for laughter”.

A waiter approaches to talk to Jim.  ‘Apparently you’re famous,’ he says, hardly the best opener when addressing a celebrity.  He goes on to explain that he has only been in the UK for a year.  When Jim discovers that he is from Lebanon, he tells us the story of how he was sent there by Margaret Thatcher in the early eighties.

‘There was this peacekeeping force and I was going out there to entertain the troops.  This was at the time of the Israeli invasion.  It was a beautiful place and the Israelis fucked it.  There were bullet holes everywhere.  Maggie told me that when I got back they would be able to announce to the press that it was all safe and secure.’

So she was using him, I suggest.  ‘I don’t think so,’ he says.  ‘I was a big fan of Margaret Thatcher.  I used to sit with her towards the end of her life.  I was heartbroken when I wasn’t allowed to attend her funeral.’

It was his arrest under Operation Yewtree, the subject of his current Fringe show and new book, that led to the decision not to invite him to the funeral.  It’s still clearly a sore point for Jim, and explains his severe dislike of David Cameron.  His new show is in part an attempt to exorcise some of those demons.

Having seen Jim’s show last night, I was struck by how inoffensive the material was, especially given his reputation.  ‘Yeah, but you only did that because you knew there was a critic in,’Andrew suggests to Jim.  ‘That’s right,’ Jim says.  ‘In your review you’ll be saying that I’m really tolerant, and then tonight I’ll be back to slagging off ethnic minorities.  You’ll look like a fool.’

I want to explore the degree to which his stage persona differs from the real-life Jim Davidson.  After all, every stand-up is a character to some extent.  I suggest that in Jim’s case, the critics seem to take his work at face value.

‘Not everybody does,’ he tells me. ‘My audience gets it. Middle class white men don’t understand why working class black and gay people come to my shows.  It’s because they get that it’s a joke.  If I get it right then the joke is on the racist not the black person.  It’s all about context.  I get it wrong sometimes, and sometimes I say the wrong thing, but isn’t that true of most comedians?  I can’t spend the rest of my life apologising to people for stuff I did in the 70s.’

He is clearly alluding here to Chalky White, his West Indian immigrant character.  Andrew mentions the 1970s sitcom Mind Your Language as an equivalent.  ‘Nobody would make a show like that now,’ Andrew says.  ‘It was all terrible racial stereotypes.’

Is that why Jim stopped his Chalky character?  Because of a shift in tastes, or the rise of political correctness?  ‘No,’ insists Jim.  ‘I stopped because that type of person wasn’t so common anymore.  Back then, there were so many black people with West Indian accents, so it was a recognisable figure.’

I point out that even back then some people were offended by Chalky.  I remember kids at my school would repeat racist jokes that they heard on the television.  I mention that we graduated from doing the Chalky accent to doing Lenny Henry’s accent from when he was on Tiswas, but no one could call that racist because Lenny was black and doing it on children’s TV.

‘Is doing an accent racist?’ asks Jim.  I say that it can be, if it’s intended to belittle a person because they are different.  ‘But an accent in itself is not racist,’ he argues.  ‘It’s what you say that matters, surely?  I understand the difference between a racist joke and a joke about race.  Very rarely have I been accused of racism by a black person who knows me.  I’m usually accused by white people who don’t.’

Needless to say, this is an ongoing debate that we are unlikely to resolve over one lunch.  ‘I think the debate is important,’ says Andrew.  ‘I’ve always thought that it’s a particular failure of the left to dismiss people on the right as evil.  It’s a way to avoid arguing with the issues.

‘I also feel that if you isolate or demonise people with whom you disagree, you simply harden their position.  Peter Hitchens is a good example of this.  He’s been branded as a homophobe and a racist, whereas he’s actually an intelligent and talented writer who deserves to be taken seriously.  I profoundly disagree with a lot of his views, but I don’t think dismissing him as a bigot is at all helpful.’

As we leave the restaurant Jim has a sudden change of heart.  ‘I’ll do the play,’ he says.

‘Yeah, come and see what comedy used to be like.”’

Suddenly, the prospect of Jim Davidson appearing in a play about coming out as gay has become a reality.  It seems a little surreal, but then Outings is a play based on the preconceptions we hold about people.  In a strange kind of way, his appearance in the show will make perfect sense. 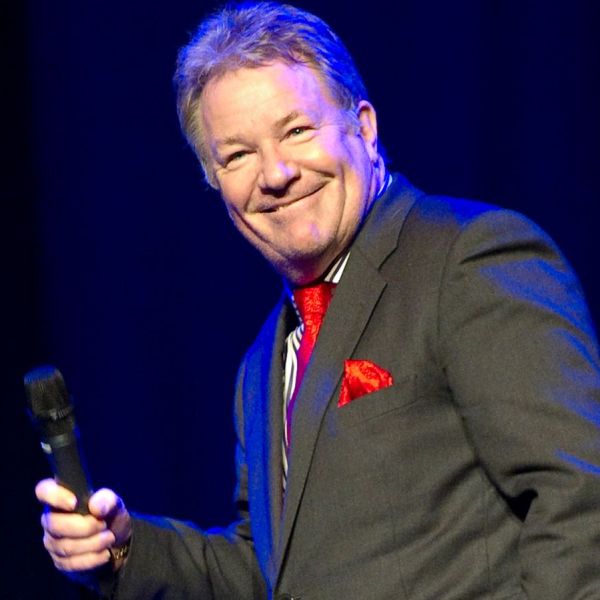