Malcolm Hardee was a true original. A performer, a manager and a convicted car thief, he was one of the UK’s very first alternative comedians. He died suddenly in January 2005 – whilst still in his 50s. Martin Walker talks to John Fleming about The Edinburgh Fringe, performing with Kate Copstick and keeping Malcolm’s legacy alive.

“As always during the Fringe, I am producing a free two-hour variety show at The Counting House Ballroom on the final Friday night of the Fringe: Aaaaaaaaaaaaarrghhh! It’s the Increasingly Prestigious Malcolm Hardee Comedy Awards Show. Basically, it’s the most bizarre acts we can find plus celebrity Russian Egg Roulette – comedians smash eggs on their foreheads – plus maybe spaghetti-juggling and nudity.

“Also this year, I am doing an alleged chat show every afternoon at the Counting House Lounge called Aaaaaaaaaaaaarrghhh! It’s The Grouchy Club with Kate Copstick & John Fleming. Basically, it’s a one hour daily social club for comedians – The Grouchy Club – and, if they have bizarre enough stories plugging their shows or themselves at the Fringe, they may get mentioned in Copstick’s Scotsman/Scotland on Sunday columns and/or in my increasingly prestigious blog. No specially-invited guests; people just turn up.

“If no-one turns up, Copstick and I will just bitch about comics and the Fringe for an hour. Putting “Aaaaaaaaaaaaarrghhh!” at the front of titles was something Malcolm Hardee did to get first listings in the Fringe Programme – except The Grouchy Club is not listed in the main Programme because it was a last-minute idea. It is in the Free Festival Programme.”

How did the Malcolm Hardee Awards get started?

“I thought ‘How can I get free tickets to every comedy show in Edinburgh for the next ten years?… I know, I’ll invent a comedy award.’ So I had trophies made to cover 2007-2017. It seems to have worked.”

How did you first meet Malcolm?

“In about 1985 or 1986 I was a researcher on TV shows Game For a Laugh and Surprise Surprise and looking for bizarre acts. Malcolm was agenting and managing bizarre acts.”

I really enjoyed Sit Down Comedy – the book you and Malcolm co-edited.

“A publisher had the idea for a book of short stories written by stand-up comedians called ‘Sit-Down Comedy’, but foolishly said the stories did not have to be laugh-a-minute. The result was Malcolm and I commissioned nineteen comics who wrote tales which were often funny but which also included beheadings and fantasy strangeness. Barking mad. The publisher should have re-titled it ‘Sit-Down Comedians’ but publishers, as a breed, are not original thinkers. They would not make good stand-up comedians.”

How did Malcolm die?

“One night, drunk, he fell into a dock in Rotherhithe, by the River Thames, and drowned. According to the police, when he was pulled out three days later, he was still clutching a bottle of beer.

“His mother phoned to tell me a couple of hours after his body had been recovered. If it had not been his mother, I would not have believed it because, a few years before, I had suggested he fake his own death by drowning at North Berwick and then re-appear at his own funeral.”

What first attracted you to comedy?

“The fact all comedians are barking mad. Would anyone pay to see a show headlined by Barclays Bank counter staff? No. Barking mad is good.”

You write a popular blog.

“Last year, I started saying repeatedly and endlessly that it is ‘increasingly prestigious’. As a result, people are now starting to say it is increasingly prestigious. It is a daily blog mostly about comedy, but not always. It is really about interesting people doing creative and quirky things. It is re-posted in the US and elsewhere and I guess around 60% of the hits are from the UK and Ireland – but it is widely read abroad. If I ever pull my finger out, it will end up as annual eBooks and, for the last couple of years, I have been consciously writing it so it will read well chronologically with recurring characters and ongoing strands – like a road movie type of written narrative. I am partly through turning my 2010-2011 blogs into the first eBook.”

Finally, if you were curating a stand-up show for TV, who would be your guests?

Handstands in the Dark by Janey Godley (edited by John Fleming) http://www.janeygodley.co.uk/autobiography.html 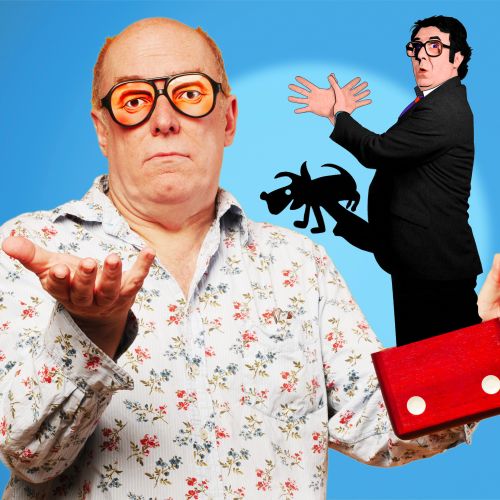