Character comic Pippa Evans first made a splash on the comedy scene with an incredibly successful debut Edinburgh show in 2008, when she was nominated for the Edinburgh Comedy Best Newcomer Award. She returns to the Fringe this year with a show… about being Pippa.

“Does anybody really know who they are? I spend most of my time pretending to be other people – Loretta Maine, for example – and sometimes I think I am better at being those people than being me! How can I know an imaginary person’s thoughts better than my own?

“This show is a quest to find my own voice by thinking about all the exciting, amazing and stupid things I have said or done over the last few years. They include setting up a godless church called Sunday Assembly, hanging out with a lot of elderly people and getting deeply distressed by parallel parking. I’ll throw a couple of characters in too. And some songs. And a lot of cock jokes.”

Why did you choose to perform as part of the PBH Free Fringe?

“The PBH Free Fringe is a place where you can find a stand-up in one room and a person singing with a bucket on their head in the next. Comedy next to theatre next to melt down. That is the true fringe! Without PBH, EdFringe is heading solely to slick, corporate comedy and theatre.

“Acts need to experiment and audiences need to know that there is more out there. By being free, PBH encourages people to try things they never have before – both punter and performer. The Free Fringe is a key part of the Festival as a whole.”

“Attempted intelligence with a lot of crotch references. And songs.”

“I have had so many fantastic experiences being on stage. I really enjoyed taking part in the ARG Comedy Festival this year with my Pippa show. We laughed a lot together, which is my favourite kind of show. When you feel like you have had a particular experience together that can never be repeated, even if the material is the same. Otherwise being Ross Noble’s Saxophone during a surreal Comedy Store Players, or sometimes the excitement of live performance comes from audience interaction. Recently I had a show down with a woman who heckled, ‘you’re not a feminist.’ What a silly little woman. Joke. I will just point out that is a joke!

“Probably my favourite experiences on stage are with The Showstoppers. Improvising musicals with my pals – especially Ruth Bratt. In fact, most recently, singing an Avenue Q number as two dogs trying to understand the concept of neutering. That’s probably up there.”

“Josh Howie, Sarah Campbell and Holly Burn would do sets. Duncan Walsh-Atkins would be the head of my pit band – all shows need a band and I would have Trodd en Bratt in a box next to my sofa from which I would make dad jokes and sing old Vaudeville songs in a faded wedding dress.” 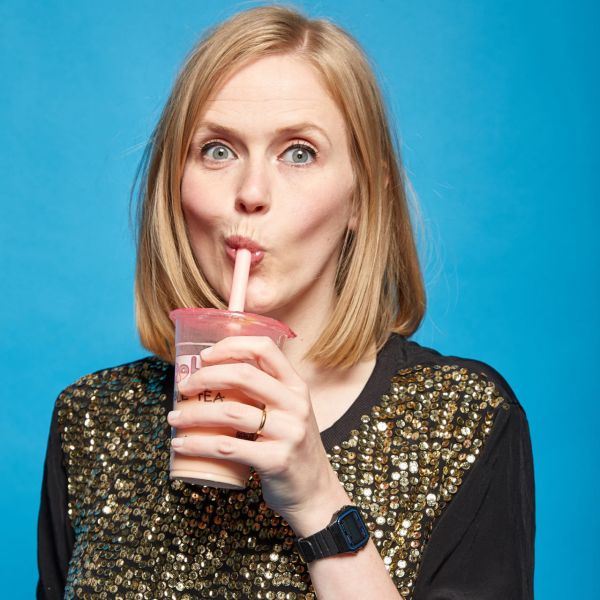