Jack Samuel Warner: John loosely takes on the ‘Men’ side of the show, with anecdotes and incidents from his personal and public life, and I roughly take on the ‘Myths’ element, as I tend to enjoy passing off nonsense as fact and taking ideas as far as possible. In effect we explore masculinity, as well as castles.

JP: We both mess around a lot with wordplay and imagery so the two sets are surprisingly complimentary. We’re both a bit like playful puppies, although I’m likely to fetch a ball, and Jack’s more likely to hump your leg.

How did you meet each other?

JP: We both started doing comedy in 2010 and met doing amateur open mic nights in London.

JSW: The open mic circuit is a very social environment when you first start stand up. For the most past it’s very supportive. You see the same people at the different gigs, and get to know the ones you get on with quite well. John and I made each other laugh from the get go.

JP: The first time Jack’s mentioned in my diary is 9thDecember 2010 when we both did Downstairs @ the Kings Head, in Crouch End. I gave him 5/5 for his set and wrote: “I’m going to make friends with him and one day we’ll do a two-hander in Edinburgh together.” The rest is history … or possibly stalking.

JSW: I have no memory of meeting John for the first time, but now I look after his cats when he’s on holiday, so I’m not entirely convinced that I‘m not the victim of some Derren Brown mind-control/cat-control evil scheme.

How did you start in comedy?

JSW: I’ve always loved comedy, but I didn’t really discover live stand up until I moved up to London for uni about ten years ago. I started going to new material nights like the Fortnight Club which featured pro comics trying (and sometimes failing with) new routines, which made me realise that stand up is a process, rather than the perfect, effortless lines I’d seen on DVDs. I then started going to the well-known open mic nights, like Downstairs @ The King’s Head, where I saw people trying it for the first time, and thought, “Yeah, I couldn’t be that bad, could I?” I later found out that I could, but luckily I’ve improved since then.

JP: In 2003 I won a competition in America called “International Mr Leather”, which led to appearances onstage all round Europe and North America. Over the next 8 years I continued to travel internationally hosting fundraisers, talent shows and leather contests. Finally I realised I loved doing this more than having a regular job. Also I was made redundant, which helped.

You’ve both performed in New York. How do their audiences differ to ours?

JSW: I love their enthusiasm. I like the way that they applaud almost anything, day of the week, geographical location, you name it. The only thing I saw get a frosty reception was Hitler. I felt compelled to agree.

JP: There’s a lot more discussion of race in American comedy. White Americans would describe themselves as “Irish-American” or “Italian-American”, for example. Over here we’re much quicker to think an act is racist if they talk about race.

Imagine you were curating a stand up comedy TV show. Who would be your guests?

JP: It’s hard to pick just a few – off the top of my head: Tiffany Stephenson, Justin Moorhouse, Gina Yashere and Stephen Grant.

JSW: I’d like to see a chaotic show, with acts that you wouldn’t normally see on the box, so maybe Phil Kay, Darren Walsh, Kelly Kingham, Mr Susie and Trevor Lock. 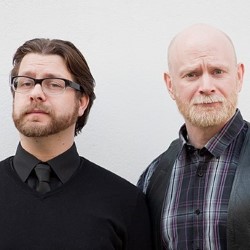