Tell me about your 2022 Edinburgh Festival Fringe show, Bowerbird

Bowerbird is an absurd ode to the Great Indoors. It’s a show about the objects we surround ourselves and the relationships we form with them – it’s a bit like Toy Story, if Toy Story involved extramarital affairs between kitchen utensils. To be fair, it might – I haven’t seen the fourth one. Maybe things get real sexy in Toy Story 4.

The feeling of the show is like being invited around to someone’s house, and realising they live in an abandoned IKEA and that they’ve slipped acid into your tea. It’s good old-fashioned soft furnished fun, but I’m also trying to explore the emotional side of why we become hoarders. It’s something that I think about a lot, being a comedian who is unable to make a show without at least one hundred props. I’m beginning to worry that my career is enabling my habit, rather than the other way around…

It’s exactly what you need as a baptism of fire into Fringe insanity at half midday.

I loved your first solo Edinburgh show, which you performed back in 2017, the one-man nature documentary Planet Earth III. For those who haven’t seen that or your 2019 offering Infinite Content, describe your performance style.

It’s physical comedy for cool, popular people like you and me. Not everyone gets it, and that’s OK, because not everyone is up to date with the latest trends like ripped jeans and sunglasses.

How I’d really describe it is that it’s an absurd, super inventive visual comedy that makes you look at everyday objects in a totally different way. It’s like if Mr Bean broke into your house and started getting freaky with all your stuff – initially you’re surprised, then you’re annoyed, but eventually you are charmed, and you will put money in the bucket on your way out (of your own house). You lose your house, but you gain perspective.

You trained at L’Ecole Philippe Gaulier. Probably the most prestigious clown school in the world. Tell me about that.

Gaulier gets this reputation of being this ultimate tough trauma training, mostly because of people like me saying things in interviews like “I went to L’Ecole Philippe Gaulier, and this old French man beat me up and called me a piece of shit”. Which obviously is a narrative which benefits me, because it means I look like a real tough cookie who can get beaten up by an old man – and pay for it! But that doesn’t really square with my experience of the school. I mean, I did get beaten up. But in a friendly, playful way!

The thing that was best about that school was the group of people I shared my time with their – truly the most diverse, international community I’ve ever been a part of, and I learned so much from them. Obviously, various socio-economic factors mean that a certain class of Gaulier graduates end up being the people who come to Fringe and therefore get the most visibility – and so we perpetuate a narrative that it’s only attended by white university-educated bros. Like me! I’m a total bro. It’s a pity because that story puts people off going. For sure, it isn’t for everyone. The “training” is super weird.

Tell me about the Stepdads.

Stepdads is a joke side-project that has come dangerously close to eclipsing the rest of my career. It’s a funk-comedy double act with my long-time collaborator Tom Penn where we pretend to be the audience’s stepdads. That’s pretty much it, although our last show developed into a Spy Kids-style narrative where we revealed every stepdad in the world is a sleeper agent spying on the families of super criminals. It ended with us pretending to kill the family’s real dad.

Weirdly, people love Stepdads. We’ve literally only done that show five times and people keep quoting it at us and asking us when it’s coming back. Unbelievably, we almost won several high-to-mid profile comedy competitions. Stepdads felt like a safe way of engaging with the more competitive side of comedy because we could only ever be totally wrong for a sketch or a musical comedy competition. But we came second place in both in 2019, and then were finalists again in 2020. We’re worryingly successful and someone needs to stop us.

My favourite review quote ever is from Bruce Dessau, on Stepdads: “It might be funny to perform in your pants and fall over but it’s hardly pushing the comedy envelope.” I will keep performing Stepdads until we convince Bruce that falling over in your pants is groundbreaking comedy.

We keep trying to get on Britain’s Got Talent, but they won’t have us.

What shows are you looking forward to seeing?

Great question! This is a weird year for the Edinburgh Fringe because we haven’t had a proper one since 2019, which means there are loads of people waiting to do their first show. And that includes some fantastic, high-profile stand ups who have done a bit of TV work in the meantime. But there are also lots of brilliant, slightly offbeat acts who are making their Edinburgh debut who are creating really jaw-droppingly good stuff that deserves just as much attention. My favourites are Christian Brighty, Crizards, The Lovely Boys, Julia Masli, Sami Abu Wardeh, Trash Salad, Ted Hill and Freddie Hayes. 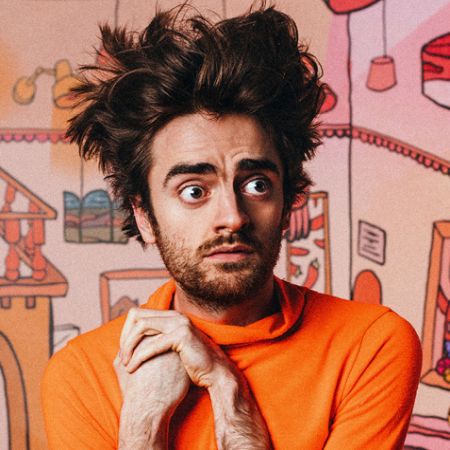