“It’s called Cuckooed. It’s about a very close friend, who betrayed me and some of his other closest friends. We were a tight knit group campaigning against the arms trade, but we discovered that this person was a spy from BAE Systems, the arms manufacturer.

“It’s about how we let it happen, and the emotional and political aftermath. It’s about the way it affected the movement, and about the complexity of liking someone who is your enemy.”

I can’t imagine what that must have felt like.

“I’ve talked to friends of mine from that time, and all of us denied it was happening. But we slowly realised it was going on and the effect it had on us was startling.

“I’ve gone around the country interviewing these old friends, talking about what happened and why it happened and how we felt, and the fact that all of us went through the same or similar feelings and thoughts at roughly the same time…

“In my last play at the Traverse, Bravo Figaro, I had my mum and dad and my brothers voices on stage, so they start to take over part of the story telling. In this I’ve got my mates on video. I have tried to make it a collective endeavour, to get all the voices on stage, to get them to have ownership of the story, while I deliver it as an individual solo performer.”

Is this kind of spying by a private company legal?

“I did actually speak to a lawyer a few years ago about whether we could take legal action and he said we had just run out of time.

“The problem is that when it happens you feel quite ashamed and you don’t want to talk about it. You don’t want to discuss it. That feeling of embarrassment and shock lasts for ages. So it’s taken us a while to get used to the fact and to react to it as activists.

“Actually it has happened to more people than you think. A friend of mine had a police spy infiltrate his anti-capitalist group. I asked why they didn’t broadcast it at the time. He said they just dealt with it, kicked him out of the group and thought, well that’s that. They didn’t realise the scale of what was happening.

“And that’s part of the reason for telling the story now. There is just so much of it, as a society we need to get a grip of it.”

It was in the news recently wasn’t it? Undercover police spies having sexual relationships with activists and so on. Then it sort of dropped off the news agenda.

“Well, it’s still going on, but there are legal challenges happening.

“There’s also legal challenges with the construction blacklist. Building companies were organising these blacklists – which I am on bizarrely enough. I had it confirmed by the Information Commissioner’s Office, and I’ve got people going, that’s a shame Mark, I was hoping you were going to fix me gutter…’

“The brilliant thing about it is being able to do a show at the Traverse. I love working with the associate director up there, Emma Callender, who is really great, and to be able to say ok, this is a theatre show now, this isn’t Mark mucking about.

“The last show I did was 100 Acts of Minor Dissent and I had to commit an hundred acts over the course of a year and it got really raucous, it was fantastic That was a great thing to do, but I love the fact that all the shows I do are quite different.

Unlike most satire, after one of your shows the audience is left in little doubt how they can help change things. You empower your audience.

“What I’ve been obsessed with for years is, how do you break out of that, how do you interact with your audience meaningfully? In A Hundred Acts… people brought their own stories in, stickers were distributed, loads of great ideas. We showcased some of the results in an art exhibition we had in Sheffield. Oh, and had a competition for the best definition of the word Farage.

The People’s Manifesto was like that too wasn’t it?

“Yes, and I was really pleased with that, because it turned the whole thing on its head. Instead of going ‘if the audience engage with the show, lets swat them back so I can get on with the material’ it’s ‘I want to encourage you to discuss things, I want you to feel comfortable about expressing opinions and I want other people in the room to be able to challenge it and be able to play with those ideas.’

“And I loved it, because you suddenly go to your audience, ‘I’m going to trust you.’ It’s a fucking great feeling.

You asked people to get involved when you had your Channel 4 show didn’t you?

“I did. For example, on the Mark Thomas Product when we were doing stuff on the tax laws, the rich could exempt works of art on the basis that they were available to view for the public. So I’d ask people to go and see things; it goes way back, getting people involved in stuff.”

I was there outside the Russian Consulate at the LGBT protest comedy gig you organised as part of A Hundred Acts, which was a great; everyone was really up for it.

“It was fantastic. What I loved about that was there was a sense of mischief and fun, but also compassion and common purpose.”

And an undercurrent of anger, a real sense that this is outrageous.

“The way gay people are treated in many parts of the world is outrageous. But what I love is the sense of you don’t have to be alone in this stuff, we are all in it together.

“David Cameron is right about this one thing, except he’s not included.”

He’s part of the one percent?

I just want to briefly touch on the subjects featured in your three books. You’ve talked a lot about the unethical practices at Coca-Cola, on TV, on stage and in your book, Belching Out the Devil. I imagine you must have annoyed them immensely. Have they ever tried and stop you?

“No, they haven’t. I think they decided, rightly, that if they went for me in any way I’d go to town on them. It would make it a bigger story and the facts would reach a bigger audience.”

Your book Extreme Rambling, and the accompanying show, was about your attempt to walk the Palestine/Israel apartheid wall. Current events in Gaza must alarm you.

“There is inhumanity – a lack of empathy – on both sides. What happened with those young Israeli men was a dreadful crime. Awful. But in the end you have two sides to a conflict with one, an occupying force that is far stronger than what they see as the enemy.”

The subject of your first book, Nelson Mandela, once said, ‘If you want to make peace with your enemy, you have to work with your enemy. Then he becomes your partner.’

“It’s a little awkward when your enemy works against you, whilst pretending to be your friend.” 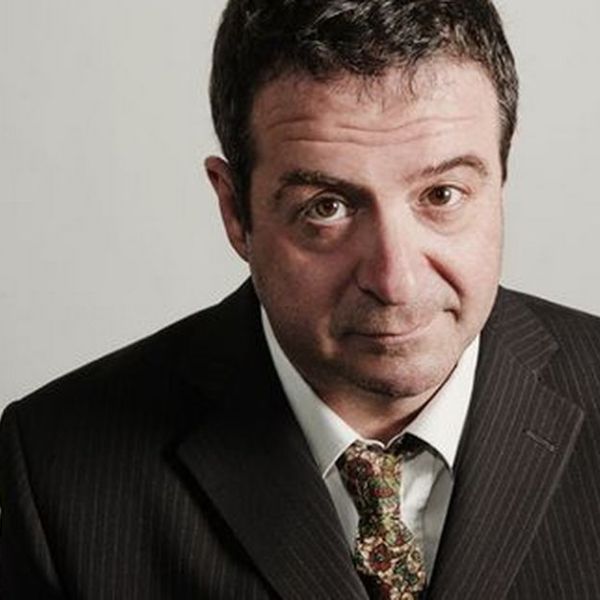