Tell me about your Edinburgh Show?

My Edinburgh show is called An Aesthetic because I’m a piece of shit. I don’t know what it’s about yet cos it’s only June, gimme a chance.

A friend of mine wanted to try comedy and asked me to come do an open mic with him, so I did. Except, it was a music open mic night and we were the only two people doing comedy. I followed a guy doing a ten-minute original acoustic guitar song about how his heart was like a vending machine cos it would give to anyone. And it’s all been downhill from there.

Tying my shoes and panicking that I’ve forgotten how to do comedy.

An audience member from my show at Soho Theatre ran into the street after the show and shouted, “Ed Night is the worst comedian I’ve ever seen, he’s a prick”. Unfortunately, for them they came the same night as my Mum, and my best review is what she shouted back at them.

Maybe, I don’t really mind reading my reviews. I’ll be reading other people’s reviews cos I’m a petty asshole.

There are good ones and bad ones. It’s easy to find fault in reviewers who slag you off and gloss over the faults of the ones that laud your work. I think that reviewers could be held accountable for more, and it seems like anyone can just say they’re a reviewer, but stand up comedy is exactly the same. It’s an ad hoc, unregulated industry. Reviewers aren’t the be all and end all. Nobody cares, you do you and just have fun with it. For every criticism you get there’ll be ten people tweeting you to tell you they loved your show and in 100 years we’ll all be dust and nobody will remember.

Freedom of speech isn’t freedom from repercussions, or the freedom for everyone to accept or agree with what you say, and much as the few videos of his I’ve seen have left a sour taste in the mouth and I whole-heartedly support those who’ve taken umbrage at what he says, I don’t think the repercussions should have been litigious. So, while I don’t like him or his content, I do like freedom of speech. Personally, I think the most offensive thing is that he calls himself a comedian; with a name like Count Dankula the “it was a joke” defence doesn’t really fly. Seriously, if you’re thinking of killing yourself and you need the final push just watch some of his stuff. It’s sub-Sickipedia edgelord ass, the kind of “humour” a thirteen-year-old latches on to cos his parents don’t pay him enough attention. So, while I would personally like him to get a court order that prevents him from ever talking again, and I don’t agree with what he said, and the fact that he calls himself the same job I call myself makes me want to have a long wash, it’s not for the government to decide. The fact that this has spun out into an almost Lenny Bruce level debate on freedom of speech is farcical – Bruce was a brilliant man full of empathy and soul fighting for basic freedoms from oppressive and hounding censorship by a thuggish administration, not a click-desperate fuckboy who thinks lip piercings and the word “cuck” count as a personality throwing his toys out the pram cos people didn’t like a flippant, unfunny holocaust “joke”. Actually, fuck it. Bring back hanging.

None, but it all depends on context and handling of the material. It’s not a simple issue.

Almost definitely, but it’s subjective. There are some people who think me using the word “cunt” is going too far. I once got 4 complaints because I sneezed on the radio. 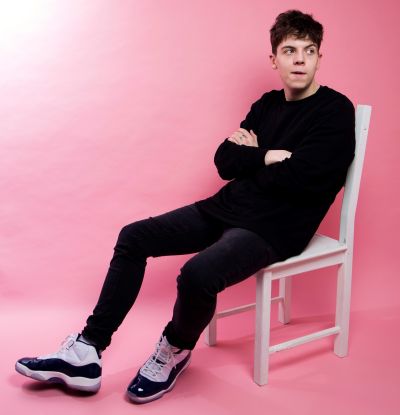