In essence, the theme of the show is in the title… we play games with your mind… but in a fun kind of way! In fact the games we play are for the most part games that the majority of people will be familiar with, for example Scrabble, Guess Who, Charades and Musical Chairs! The difference here is all the games have a little twist to them! We also play a game of Poker but again in a unique way very much focusing on the art of lie detection! It’s a fun show that all the family can enjoy and hopefully walk away with very much a positive experience. I sometimes see magicians and mentalists bringing people on stage and embarrassing them. This is something I really dislike and something as performers we should all be moving away from and can be left in the dark ages! I want everyone that attends my show to all leave feeling good about themselves and the experience they’ve just had, and that’s ultimately the goal of the show.

This is your fourth run at the Edinburgh Fringe. What keeps bringing you back? How do you feel about the city of Edinburgh?

I first attended the Edinburgh Fringe 10 years ago and I immediately fell in love with it! I was blown by not only the variety but also the quality of the acts performing. At the time I was a performing mainly at Corporate Events and Weddings and wanted to do something slightly different. I therefore set myself a goal to come back in a few years time and perform a show myself, which I’ve now done on 3 separate occasions. I feel the vibe at the Edinburgh Fringe is in many ways unprecedented, I suppose when I think about it the Edinburgh Fringe is quite addictive! The city itself is such a beautiful city and sometimes it can almost feel like you’ve gone back in time when you’re walking around looking up at some of the incredible architecture, especially late at night when not many people are around.

The audiences at EdFringe are also amongst the best audiences I’ve ever performed for and always so diverse as well, which I like. I really can’t wait to get back there this year!

You’re a former professional wrestler! Tell me about that. When it comes to performing shows like Mind Games, are there any transferable skills?

That’s correct, so before magic and mentalism, professional wrestling was my main passion. Anyone who has seen my previous shows that may also be wrestling fans will notice the subtle references I occasionally make to the wrestling world. Ironically, the pro wrestling world is actually what led me to where I am today, not only in terms of performing in front of an audience and knowing how to try to win a psychological game with people, but also the way in which I left the wrestling world and entered the magic world. One day I sustained a bad concussion due to a kick in the head in a match, this led to me going to the hospital and while there they found a cancerous tumour in my thyroid. Following surgery several months later I found myself sat at home in my apartment quite bored with little else to do and for some reason I decided to start reading and learning card magic and mentalism and then I just evolved from there, learning from some great people along the way.

Pro wrestling is often referred to as a human game of chess and that couldn’t be any more true as when you’re in the ring you are trying to play a form of mind games with your opponent to try to second guess what they’re going to do to make sure you come out successful and also put on a great show for the fans in the process. When I bring people on stage I essentially do the same thing and in some ways it’s more difficult as unlike in wrestling where I can scout my opponent and have history of being in the ring with them, in a mentalism show I will never met the person before and initially will have no idea what they’re going to do or what they’re going to say but hey that’s what makes it fun and makes every show different!

Do we control our own luck?

That’s an interesting question and something we can all have a different perspective on. If you’re playing any competitive game you will always stand a better chance if you have a focused positive mindset, that is without question. The next step though would be to actually influence, telegraph or control what your opponents may do. If you can master that then in some way it could be said to a degree you are giving yourself a much greater odds at being successful so therefore controlling your own luck.

You’re a Mind Reader. Can you tell me what I am thinking?

The question I often get asked almost on a daily basis by people! If you really want to know then if you see me in Edinburgh grab me and I’ll tell you there and then! Better still come along to my show for Mind Games and I’ll tell you that and a whole lot more! 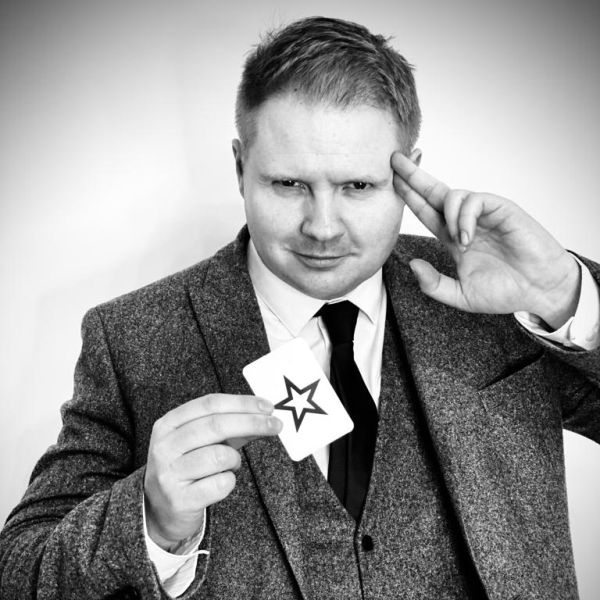