Glasgow born comedian, Julia Sutherland, is a stand-up comedian and radio presenter. She’s known North of the Border for her deeply personal, very funny and fearless one-woman shows. Hers is ‘true life’ comedy at its best. Martin Walker asks about her exciting future plans.

“Well, I’m taking a new show to Edinburgh this year – Julia Sutherland is Feeling Kind of Funny. It’s about how I constantly feel like I’m bluffing and stumbling through life – trying to keep up the appearance of being a good mum, wife, friend – just to generally be an acceptable human!

“I do think so much ‘unconventional’ behaviour these days gets medicalised and explained away as a disorder – which in the past it would just have been our ‘personalities’. So maybe in this show I’m also trying to figure out if I have an undiagnosed mental illness, or if I’m just a bit of a dick…? I guess I’m really not sure myself!

“My intent is to be very honest and open – what I describe as being like a ‘jellyfish heart’ on stage – not being scared to share intimate and sometimes very dark thoughts and feelings with audiences… obviously trying to make them laugh in the process!

All comics give of themselves when they are on stage, but Julia gives more. Surely that makes it more risky when things go wrong? I ask Julia bout her highs and lows.

“Everyone wants to know about your worst death don’t they? There are tons of them… and I’m grateful for every single one! They all make you a better comic. Getting heckled with the line “Show us your pish flaps!!” was probably a low… and getting to support a reunited ‘Absolutely’ for Radio 4’s Sketchorama, as part of sketch group Endemic, was definitely a high! And recently compering a Red Raw at the Stand in Glasgow, and getting to introduce Frankie Boyle to an unsuspecting audience was pretty fun too!

“But my all-time favourite experience was truly every time I performed my first solo show (‘Fat Chance’) last year – it was exhilarating to do, and kinda emotional to have people tell me afterwards how much they could identify with it. I want to keep doing that!”

Julia worked for the BBC for over a decade, latterly as a producer and presenter.

“Now I’m freelance – currently working mostly with my good friends at Dabster Productions (an Edinburgh based indie), on several projects: The comedy documentary series I presented and co-produced earlier this year for BBC Radio Scotland – ‘Feeling Kind Of Funny’ – has been re-commissioned for a second and third series, and I’m also part of a writing team – which includes the hugely talented and hilarious Sanjeev Kohli, working a sitcom pilot for BBC Comedy.

The BBC has announced a ban on all male panel shows. I wonder if Julia believes this benefits women.

“It’s annoying that they felt they had to announce that, as firstly – doesn’t it go without saying that they should have had a better gender balance on their shows in the first place? It’s hardly progressive and fanfare worthy to NOT have all male line-ups! And secondly – now women who are booked to go on these shows will either feel like they are token, or audiences might perceive them to be. Either way – it actually puts women at a disadvantage. Not great!”

I also ask about the axing of BBC3

“It’s hard to feel strongly about it, as I only ever watched Don’t Tell the Bride… – but Don’t Tell Anyone! All the comedy stuff I’d maybe have a look at online, so… I dunno. The BBC has to try and keep so many different people happy… I’m just glad it wasn’t my decision to make… Ok, that’s a lie. I’d be drunk on the power.”

If Julia were curating her own stand up show for TV… Who would be her guests?

“Gah! I just know, there will be loads more – I’ll be kicking myself because I forgot to mention someone because you put me on the spot!! Damn you Broadway Baby! Move over McIntyre… I’m definitely going to need a second series…” 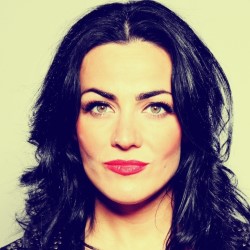