In what promises to be a highly original Edinburgh Festival fringe show, Juliette Burton uses comedy, a power-point presentation, original music and interviews with a wide range of people, to celebrate the diversity of beauty. Martin Walker finds out more.

“Y’see, in real life, I’ve been a size four and a size twenty and everything between due to eating disorders. Same eyes, same mad little mind but very different bodies. So I decided I’d explore the idea further by changing my appearance even more! Thanks to Arts Council research funding, I’ve used prosthetics to adopt all kinds of different guises.

“I’ve also worked with a variety of people in researching this show from the facially disfigured to people with hidden illnesses, Muslim women, older people, physically disabled people – to explore their stories.

“It’s all about body confidence, diversity celebration and total honesty. I’m taking bigger risks in this show and I hope it pays off!”

Your Fringe debut last year was a massive success. What have you been up to in the last year?

“Aw! Thank you for the compliment! Well, I’ve been running around meeting lots of exciting people about potential projects, filming the incredible Timelapse video by Alex Beckett and the music video for Look At Me by Frankie Lowe with Carse and Waterman, doing a huge amount of research for this new show.

“I’ve also been performing that debut solo show When I Grow Up across the UK and was taken on a three month tour of Australia where I got to perform in Adelaide, Melbourne and lots of other places. And I’ve been planning for more shows in coming years. So it’s been a crazy 365 days… And I know crazy – I’ve been sectioned!”

“I’d love to say ‘I try not to seek a specific reaction from an audience – you have to let them enjoy a show in their own way.’ I’d love to be that Zen… and I’ll work on that! But to be honest I absolutely love it when an audience are loud and responsive. I love big laughers who put other people at ease and give them permission to laugh openly too.

“The worst experience is when all the technology fails – it’s stressful but being honest with an audience means it can still be fun. But it is hard when certain audience members don’t engage. One fifteen year old lad kept interrupting the show asking me for my phone number and kind of trying to hit on me. He seemed to respond when the rest of the audience cheered as I told him to keep it in his pants.

“Best experience on stage – whenever I do a new show and an audience gets it. It’s such a relief to know these stories, this kind of comedy, my view on the world is appreciated and shared by other people. And selling out in Edinburgh last year on the day when comedy legend John Lloyd came to see the show. That was pretty awesome!

“We could argue everything is political. Every viewpoint can be construed as to do with politics. But I’m not politically motivated, no. Right now, I wouldn’t want to do material about elections or referendums. Partly because I used to be a BBC broadcast journalist so it was drummed into me to be politically objective and objectivity isn’t always what people want in political comedy… But also I don’t deal directly with politics yet in my work because I want to be as inclusive, warm and welcoming as possible. I don’t want to be divisive.

“I want to subtly change the world without forcing an issue down anyone’s throats or attacking anyone else’s views. I want to bring people together and comedy can do that, really powerfully. Then again, ask me in a few years and I may’ve turned into an angry, politically-charged Frankie Boyle!”

“If I were curating a show for TV, I’d love to invite comedy performers who aren’t purely stand up – and then we’d create a show a bit less like of a clone of Live at The Apollo.

“I’d love to invite Daniel Kitson (king of warm, inclusive comedy) Marcel Lucont (I’ve got a crush on him), Randy (I have a puppet-crush on him), Lily La Scala (I’ve a lady-crush on her), Casual Violence (sketch stars on the rise), Abandoman (he got me onstage in Adelaide to rap at me – I was laughing so much it very nearly became the first time I peed my pants in front of an audience) and Tim Key (he got me in his bed in Melbourne…his on-stage bed in his show ‘Single White Slut’. I’d love to carry that conversation on…also he has a lovely beard).

“Would The Boy With Tape on His Face come on a stand up show? And Red Bastard… and Adrienne Truscott… What channel are we pitching this to? To get all those awesome and potentially controversial acts on the show we’re gonna need to start on the paperwork now…” 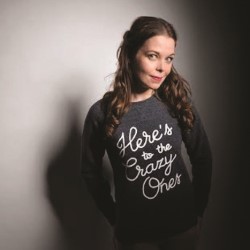