This Edinburgh Festival Fringe you are invited to enter in to Madame Señorita‘s world. It’s a place that’s charismatic, mysterious and quite stupid, in which social norms and preconceptions are left behind to give space for naivety, passion and curiosity for life. Martin Walker talks to her creator, Paula Valluerca.

“Madame Señorita is a force of nature who is seeking fame after selling out her cabaret nights at ´La Taberna de Paco´, her local village bar back home in southern Spain. She hopes to catch the eye of a rich producer or a famous director in the festival city, or a combination of both! Otherwise, she will have to go back to her daily life as a housewife, washing dishes and killing chickens for supper to feed her unbearable cousin- husband in their small farm in South Spain.

“Along the way she lets us into her tempestuous love life and tries to leave her mark on British culture and make us a bit more open to our feelings.

“So, if you want to leave behind social norms and preconceptions, make space for passion and curiosity for life, this is a show for you!”

“I didn´t want to invest a lot of money in this, because I am not doing it for money in the first place. I have always wanted to experience asking for a donation after my show – I want to see how much my show is worth for the audience. I am part of a broad community of actors that have performed at The Laughing Horse venues before and it has been a very good experience for them.”

“I am a professional actor, but I only started making comedy a couple of years ago. My first contact with the comedy world happened when I suddenly realised that whenever I thought I was being tremendously serious and dramatic, people found me funny. It was quite disappointing in the beginning; I am not going to lie! But then I learnt to use it, and I now quite enjoy not taking myself as seriously as before and embracing the ridiculous part of my misconceptions. This character in particular Madame Señorita is an attempt to present all my naivety and fragility to show the audience how sweet, crazy and stupid can the image that this woman has of herself be.”

“I was recently performing at The Lost Cabaret and I picked on the wrong person. There was a really nice atmosphere in the room, but I got obsessed with The One that wouldn’t enjoy anything because he convinced himself he wouldn´t be able to. To all my questions the answers were: Nothing, None, No. He was the no, the zero, the negative, the minus, the brick-wall man, and he wouldn´t let no one change that fact. Finally, I had to bring him on stage and tickle him to find out if he was actually a human being. Guess what? He was! He smiled and kind of half-laughed very awkwardly and I could finish my act in peace. But I am telling you: never again!

“On the other hand, this is an extremely rare situation and I have lived some incredible moments with Madame Señorita: ladies showing me their underwear, people that have rocked me as they whisper a lullaby to my ear, and some genuine moments of belly-laughter. My last memory about the craziest laugh was this woman that started bleeding from her nose because she laughed too hard…”

“Any of the actors of Peep Show or The Office.” 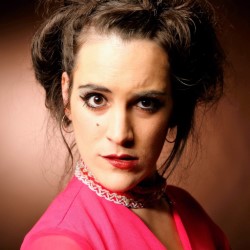