This Edinburgh Festival Fringe, The Dead Pony Society are going nowhere; quite literally, they’re performing sketches on a stationary bus for two weeks. You can join Rob, James and Giles as they seek to prove their scientific theory that everything’s funnier on a bus.

“This is our first Edinburgh show, so we’re concentrating on doing as many sketches as we can get through. With this in mind, the narrative – look at me writing narrative like I know what it means – of the show is us occasionally talking to a donkey puppet who’s our long-suffering tour manager.

“The other important information is that it cures hangovers and it’s free, so there’s actually no excuse to not come at 11:15 in the morning. Oh, and you’ll find out how Penguin biscuits write their jokes.”

“Loads of great venues. I was pretty tempted by the farm, but in the end I opted for the comedy bus. I’ve had some of my most magical moments in life on buses, and they’re the most humorous form of public transport so it was a match made in heaven.

“Plus no one’s heard of us yet so we don’t feel we can justify charging, and people are less likely to want to attack us if they haven’t paid anything.”

How do you describe your comedy to those that might not have seen you before?
“It’s closer to the sillier side of things than it is to high art, it’s mainly three idiots in stupid situations.

“Comparing myself and the others to other acts seems arrogant, so I’ll just say if you put Monty Python, The Fast Show and Reeves and Mortimer in a big, comedy blender you’d get a delicious Dead Pony Society smoothie.”

“Start performing live earlier. If I’d started at 17, it would have been 2002 and I reckon by now I’d be doing one of the best George W Bush impressions on the circuit.

“Also, if you’ll excuse me going a bit Oprah on you: Don’t waste your time worrying about the people hoping and waiting for you to fail, never trying is much worse.”

“I bet no one’s said Stewart Lee yet, so Stewart Lee, Louis CK, Johnny Vegas, Jerry Sadowitz and Bec Hill (we’ve actually done a few nights with her and she’s great. The others are just people I found on Google).” 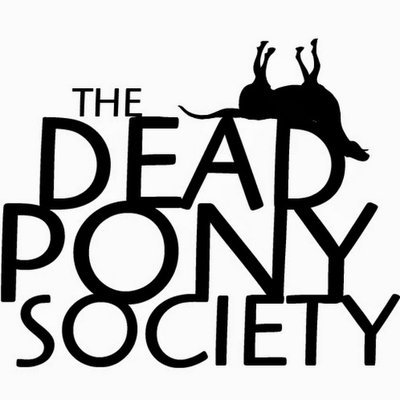