Matthew Highton is a comedian, a surreal storyteller and risky abstractionist known for an unpredictable and off the wall approach to comedy. His 2014 Edinburgh Festival Fringe show, Matthew Highton’s Good Luck Sleeping Jerks is being quietly mooted as one to watch this year.

“It’s a combination of me highlighting some of the unfortunate side effects of having a bunch of sleep problems – insomnia, night terrors, sleep talking/walking, paranoia… the list goes on – and trudging through some of the more unbelievable stories of my life. I have two stories with guns in… Oh, and there’s a mechanical doll.”

“I once had to MC a festival with Bob for twelve hours. I saw more of his anatomy in those twelve hours than my own that year. Now we’re friends and I once again believe in Santa. When Bob said do you want a slot at the Hive I couldn’t say no, mainly because of the compromising pictures he has of my family, that whenever he needs money he threatens to post on to the Internet… To stop this from happening I perform for him. I wish I was the only one, but he has pictures of all our families…”

How do you describe your comedy to people who haven’t seen you before.

“Normally I’d go ‘Erm. I dunno. Weird and surreal storytelling, I guess…’ Then I’d move away slowly, avoiding eye contact, before they say ‘What, weird like Noel Fielding?’ and ask if I’ve been on the “tele”.

“This year’s show isn’t as surreal though. It’s more focused on storytelling. Though it still gets odd and is absolutely absurd. Oh and it gets a little dark at times, so yeah there’s that too. So if you asked me and I gave a concise answer I’d probably say ‘It’s really funny’ and then I’d laugh manically until one of us left.”

“Matthew Highton – The Life And Times Of A Man Who Once Ate A Live Crocodile Whole And Inherited its Powers – a true story featuring Prince.

“The front cover would be me but with the arms of a crocodile… The opening paragraph would be: ‘A murky morning on the dawn of 1845, Sedrick wasn’t breathing and I knew there was no way we’d find our way back into our own time without him. It was at this point I knew I’d have to wade out into the bayou, alone.’

“It depends on how much notice I was given. If it was a few days I’d probably just put a Facebook status out and see who replied. That’s the problem with being friends with a lot of comedians, they’re not as professional as I am and therefore all very reluctant to take TV jobs. I love being on TV, sometimes I edit myself in to panel shows, which is great because I can take up to a week to come with off the cuff impromptu replies to topical questions and then I email them to all three TV channels and ask if they’d like me to come on for real. I’m waiting on some emails, perhaps I have a problem with my account? I should check that. 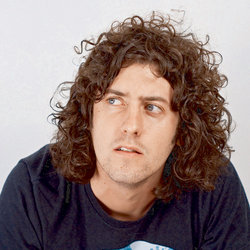