“It’s actually about a veteran cop in a dystopian, crime-ridden Detroit who is brutally murdered by a gang of drug-running thugs but then resurrected thanks to a cutting edge technology programme that allows him to be ‘rebuilt’ as a cyborg police officer. No sorry this is Robocop. My show is mostly about me doing stand-up and pointing at things on a projector screen and distracting you with silly music. It’s not as good as Robocop, but hopefully there will be fewer fatalities.”

Do you still perform as one half of Life of Si?

“I’ve been attempting to perform as more than one half of Life Of Si for a while, but unfortunately Sy Thomas prefers his legs to be featured. We are not currently performing live – unless you count our on-going cohabitation in which The Fun Never Starts – but we have plopped out a few videos this year. They reside on my YouTube channel, conveniently linked somewhere in or around this interview.”

“Forget everything you think you know about white middle class guys doing stand-up and about how things change in their thirties… Because then my show will feel fresh and cutting edge and also different from all the other white middle-class guys you’ve seen that day. I can assure you I will still be white though. It’s not that sort of show.”

Is it true that you rap during the show?

“Well that would be telling wouldn’t it! It’s in my press release? Oh right, well I don’t want to give too much away, so let’s just say there might be a little bit of rapping in the show. And by ‘might’ I mean there definitely is. And by ‘there definitely is’ I’ve clearly given too much away haven’t I? This is hard ooh look a squirrel.”

“Sam Simmons, Pete Holmes, James Acaster, Tommy Johnagin, Bo Burnham, David O Doherty, Rory Scovel, Jerry Seinfeld, Lee Mack, Woody Allen, Phil Wang, Derek Accora, Mitch Hedberg. This show is going to be painfully long. But you can go for a wee while I’m on in between. I get to be on it yeah? Come on it’s my show…” 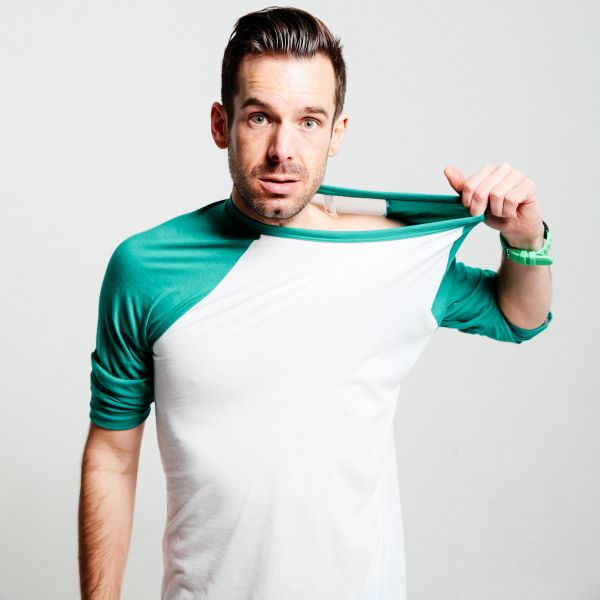