Medico is a one-woman medical comedy about life as a doctor, immigration issues and what it means to become British.

It is a sort of hybrid between stand-up, physical comedy and moving story telling. The material is drawn from my own life, including several years working as an NHS doctor on the frontline in Intensive Care, A&E and operating theatres.

The show is co-devised by Chris Head and produced by my own company TeatroLatino, in collaboration with co-producer Ben Weaver-Hincks.

The atmosphere in Edinburgh is magical. This year is my first time as a performer, and I look forward to being inspired by fellow artists and soaking up the vibrant energy of the festival. One of the aspects I love about being a performer is the rapport with other performers and theatre makers, and it’s incredible that within one city for the month of August, Edinburgh contains all the artists I admire, work with or aspire to meet. Does it get dreamier than this?

The list is endless. Basically, anyone who is strongly driven and has the courage to pursue their passions and express their voice. As a mentor, the clown master Philippe Gaulier, with his love for theatre and teaching. Philippe has taught me to always look for ‘humanity’ in any form of art we make.

The show Medico originates from my drive to share with the public the power of comedy in situations that usually aren’t linked to laughter. In a way, I also hope to decrease the distance between the public and NHS workers, by creating new feelings around medicine and attempting to humanise doctors and nurses. As I say in the show, ‘we also laugh, we have to, otherwise how do you go through tragedies and sadness?’

I am a firm believer that art, and comedy in particular, can be a life-saver, and that even among the worst tragedies it is always possible to find a moment of humour and lightness. 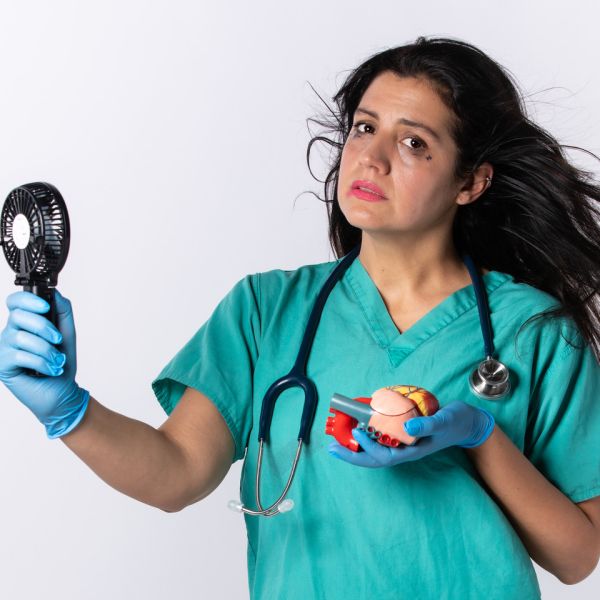