Fisk is a high energy comedy show, blending a cartoonish narrative with playful and surreal comedy. It’s a mad cap thriller, full of absurd sketches and characters lots of physical comedy and a little bit of improvisation on top of that. You can expect funky dance routines, fast paced chase scenes and elaborate homemade costumes.

The first professional gig we did was at an all mens golf club dinner in rural Essex. All of our material bombed, people were shouting golf jokes at us (which we didn’t understand) and eventually the gig was cut short because someone had to change their catheter (genuinely true).

We do collective vocal warm ups, stretches, and then take it in turns to fart nervously.

We like this quote a lot: ‘Refreshingly innovative theatre stood shoulder-to-shoulder with slap-stick and psychedelic surrealism’. It pretty much sums up our mission. But the same review described us as ‘tossers’, so it was probably both our best and worst rolled into one.

We tend to be quite positive about them, especially the ones that seem to come from a good place.

Mr. Dankula should be stripped of his countship.

Depending on who’s making the joke and how sensitively it’s handled, you can find comedy in pretty much anything. Except airplane food.

We were doing a late night gig in a bar. Mid-way through the set someone shouted ‘get your tops off’. The rest of the audience decided he was right and began chanting. It was three against fifty and we didn’t have much of a choice. Come to think of it, it was probably the audience who went too far…

In hindsight the golf club gig was probably our best. They gave us dinner. And we learnt how to use a catheter. 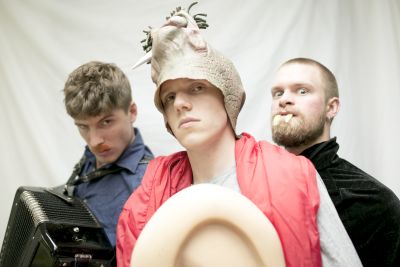