We asked Steve Bennett (no, not that one) for details about his good self in the form of a rather lovely Q&A.

What does Edinburgh mean to you?
As a performer, Edinburgh means the world to me. It’s something you just do if you want to be a better comedian. It’s a rite of passage, a great motivation too.
This is my first children’s show at Edfringe, so it’s a bit daunting because kids are the world’s cruellest hecklers

Who inspires you and why?
A lot of comedian friends, working hard on new stuff all the time. I get inspired by different ideas such as kid’s comedy; alternative stuff like Sam Simmons, Paul Currie and Spencer Jones; different ways to put on a show and make people laugh.

At the same time, I’m really inspired by people like Bill Burr and Eleanor Tiernan who can just stand there with a mic and no frills and break me in half laughing.

Describe your best or worst experiences on stage.
Best time is always when my parents surprise me by showing up at a gig. And I can see this smile on their faces like: “this is what we sent you to college for?! you’re a clown!” but they’re very supportive!

Worst time was when I was living in Bordeaux and I didn’t have any gigs for months, I got one at the local Irish pub on Paddy’s day and it turned out to be a dinnertime gig, with the crowd sitting picnic style, ordering and eating food while I performed over to their left. I’d say about 60% of them didn’t even really speak English.
I cried all the way home.

In reviews, I really like to get constructive feedback, my namesake Steve Bennett at Chortle always is great for that, he’ll say something like: “this kid is alright, this bit he did was hokey, but he’ll be funny” I like that because it gives me something to work on.

My worst review was actually after that French show where a man had gone out of his way to wait for me by the stage and tell me that I was shit: “the worst comedian I’ve ever seen”

Probably a teacher, my family are all teachers, I did it for a few years, TEFL. Good fun, creative outlet, decent hours. I might go back to it some day!

What was the last book you read?
Frankenstein, lovely book. Really sad and miserable like, but a great read.
Sometimes I need a break from the laughs.

I’d love to do a really madcap gameshow. Like a mix of wheel of Fortune and the Eric Andre Show. I run a lot of bingo and table quiz stuff so I love that kind of silly game craic. Making fools out of people. Just silly laughs. 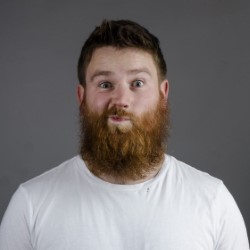