Thomas Black and  really wanted to write an Edinburgh Festival Fringe show to help guide to Scots with the independence debate. Then it occurred to them that two Ill-informed Scottish comedians maybe weren’t the best guides. In other words they Ken HeeHaw.

“Exactly! So instead we are going share our thoughts with the audience and every day they will vote and help us to decide how we are going to vote in September. Ken HeeHaw is Scots slang for know nothing.”

“This is Paul and I’s debut fringe show so we really wanted to go with PBH as they have a wealth of experience from years of the fringe. The wee blue book they publish each year is everywhere and they have some of the best venues at the fringe.”

“I’ve spent years watching great Scottish story telling comedians and I’m definitely influenced by that. As this year has gone on I’ve definitely been speaking more about Politics.”

“Every time I have walked onto the stage at The Stand has been pretty special. To be on the stage I’ve spent ten years watching my favourite acts is a great experience. Paul and I recently co-hosted a fringe preview night at The Newsroom which is the most fun I’ve ever had on stage.” 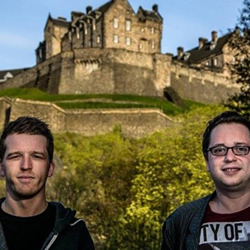