You might know Steve N Allen as a stand-up comedian telling jokes. You might know him as a radio presenter on your local station, or as a guest TV broadcaster brought in to analyse the news in a funny way. You might even know him from the SomeNews podcast on iTunes… Martin Walker gets  to know his Edinburgh Festival Fringe show.

“It’s a show all about how reading the news every day gives us the wrong idea about things, from immigration to crime to even the sex lives we should be having, we’re getting the wrong idea. But it’s not a preaching show, it’s not our fault, and it’s not even the fault of the news. The news gives us what we will buy and we want to buy things that shock us. And this is the result.”

“The free show model seems to be the spirit of the fringe and I’ve done many shows with Laughing Horse and enjoyed everyone one.”

“I started as a writer for other people and one day realised I had to man up and try performing, and loved it. There’s something nice about putting on a one-man show, it’s a very personal format that lets you say things you can’t say in the comedy club gigs.”

“The worst experiences are always when you turn up to a gig where no one thought it through, and you have no stage, no lights, the audience facing the wrong way. Those things aren’t gigs really, they’re you stood talking at people because someone thought comedy would work.

“The best experience was a festival gig that was so busy we had to have audience sat on the stage, and they became part of the show so much I really should’ve split the payment with them. But I didn’t.”

“I’d have me on it just because I need the exposure, along with Abandoman, Dan Evans, Pippa Evans and of course Louis C.K. See that BBC, there’s a woman on the show and I wasn’t even forced.” 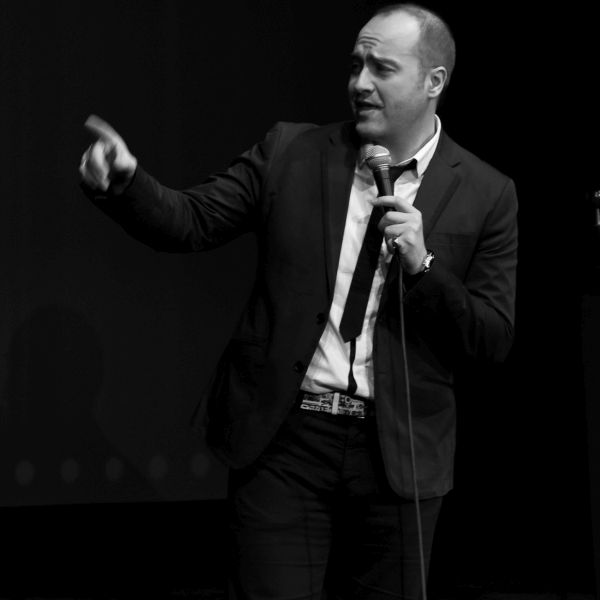