Tell me about the 2022 production of Bittersweet

Bittersweet is our debut musical-comedy show! It’s the true tale of us moving back to our hometown to find unfinished business lurking around every corner! Armed with original songs, a guitar and double bass, we are ready to unleash musical revenge on everyone who’s ever wronged us. If you’ve ever had the displeasure of dating a f**ckboy, you’ll definitely see them make an appearance or two!

You recently won Best Newcomer at the Musical Comedy Awards. Congratulations! Your real-life sisters, but when did you start performing together?

Thank you! It was incredibly exciting and the first round was actually our first ever live gig as The Sugarcoated Sisters!

Chloe is two years older than Tabby, and we started performing together at a very young age. The first show we ever wrote was a raunchy re-telling of the Nativity, where Joseph was a stoned hippy and Cupid was so drunk she accidentally shot the wrong Mary (a punk rocker) with a baby arrow in the bum. And unto them a child was born! We were 7 and 9.

After that, in our teenage years, we formed a band called Pandora’s Box – Chloe played guitar and Tabby played double bass and we both sang, along with a pianist and drummer. We gigged all over the place and actually won a BRIT Class Act Award when we were 16 and 18!

Bittersweet is directed by the hugely talented Laura Corcoran of Frisky & Mannish. How did you hook up with her?

We met as we share a publicist, who sent Laura some of our videos to see if she’d be interested and thankfully she loved them! Laura is an absolute powerhouse. We are so lucky to be working with her on Bittersweet, and the rehearsals have been a blast! During the creation process Laura came to stay with us a couple of times in our hometown where we could really delve deep into the show. Her knowledge, candour and genius is so inspiring and we have loved working with her!

TikTok is amazing! For readers who don’t know what it is, it’s a social media platform for video content. A lot of people think it’s just for trending dances and lip-synching, and that’s what we thought too until we started exploring. We had both been dumped and were depressed, so Chloe downloaded TikTok to distract us. We saw a weightlifting challenge and thought ‘We could do that!’, so we started our channel to see how many different ways Tabby could lift Chloe (she’s very strong!). Unfortunately, there were only about four moves we could do, but by this time we had seen some fab music videos, comedy, sketches and songs so we thought ‘Aha! We could do THAT!’. So, we started posting parody songs about our heartbreak instead. We made one about dating apps to the tune of ‘Cell Block Tango’ from Chicago, and we woke up the next morning to 1 million views, so we jumped into content creation. Our platform has grown to over 40 million views now, and we are about to hit 400,000 followers, which is very exciting! The community we’ve found on TikTok is so supportive and kind and we feel so grateful that people relate to our content and are on this journey with us! Our most viral video to date (6.9M views) is about Chloe having bipolar and Tabby having type 1 diabetes, and we have connected with so many people who also suffer from these conditions, which is absolutely incredible and hopefully helps people feel less alone.

Why did you write Bittersweet as your first show?

Our mum is a brilliant and creative writer, and has always said to us ‘The first thing people usually write about is themselves, and then the next thing you write is about something else’. In this instance, that is true! We’re writing about what we know. Bittersweet is about us, our sisterhood, our relationship, our exes, our sex-lives and more. And we’ve realised throughout our lives that laughter is the way we cope with everything, from life-changing diagnoses to death, to getting dumped by a toxic boyfriend! Laughing and creating something out of those experiences is cathartic for us.

Laura, our director, said when she came to stay ‘If something makes you both laugh out loud, you owe it to yourselves to try it’ and we absolutely agree! We have a list of about 200 ideas on our phones that is ever-growing, filled with ideas and punchlines and melodies that make us piss ourselves. And sharing that with people is a real joy – sometimes the most niche stories that we are SURE could only have happened to us, have happened to loads of people and they want to laugh about it too!

We also wanted the show to be a celebration of women and challenge the stereotype that women aren’t funny. Women can be crass, rude, disgusting, loud and take up space and we really wanted to capture that in Bittersweet. 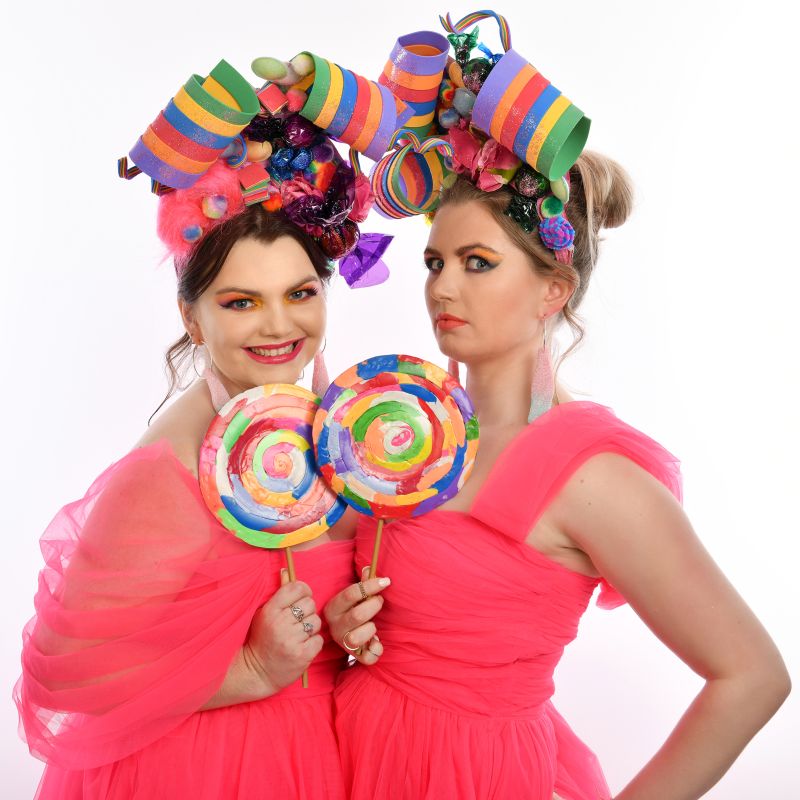