I’ve always been awful at popular sports: football, rugby, that one where you reverse-park a horse, etc. So, this year I decided to make my own up and teach them to the world.

For my first solo gigs (after Abandoman), I’d come onto stage with two massive papier-mache conkers and challenge an audience member to a match. They’d take me a weekend to make, and be destroyed in an instant. Sometimes the conkers wouldn’t even survive the first swing, instead launching themselves into the unsuspecting crowd. That idea didn’t last long.

I like to do a few lunges – shake it out. I wear sporty short shorts, so after that it’s important to make sure it’s all tucked back in.

I did a gig in Perth at the start of the year, where I soon discovered that a third of the audience worked for the Australian Sports Commission. They’d just seen the word ‘Sports’ in my title and not read the rest. I totally won them over, and – despite not returning any of my letters – I’m pretty sure they’re considering one of my games as a new national sport. 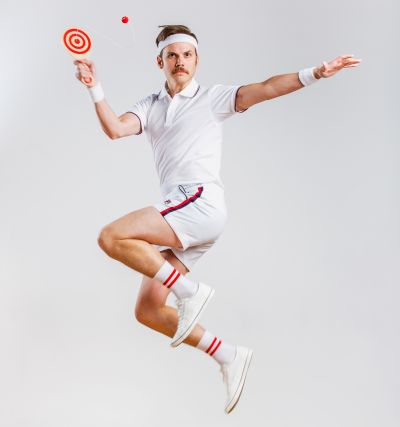