How to Record the Greatest Album of All Time is essentially a live audition tape for the role of recorder of the greatest album of all time. Performed by me. Can I do it? Well, if you take the top 10 best selling albums of all time and play them at the same time, it actually sounds quite bad. Play my one as-yet-unrecorded album by itself, in contrast, and I’m confident the effect will be reasonably okay.

When did you first suspect that you were losing your hearing? Is it a gradual process? What is the prognosis?

I started noticing I was losing my hearing when I was 17 and in a band at school. I started getting tinnitus after rehearsals and thought it might be because I was a rock’n’roll legend living to the max. That might have been the case, but it turned out it was actually because I had a disease called neurofibromatosis II (the very shit sequel). For now, my hearing is being kept in working order thanks to a wonderful little drug called Avastin but who knows for how long… it adds a bit of extra tension to the show.

You are a former music journalist. You’ve written for the Daily Telegraph, Guardian, and NME. Were you a frustrated musician who wrote, or was journalism always the ambition? Or did you always want to be a comedian?

I first started writing in my student newspaper because I didn’t know we had a comedy society and it seemed a pretty good platform for me to write fun and silly things – the Pulitzer prize was never going to be my bag, was it? Finally, I realised I could actually stand on stage and say the same fun and silly things and it’s much better for my ego. And, yes, I did spend a good few years singing with a hairbrush in my hand. I do it less now.

Tell me about Did You Hear What I Saw? – with Tom Skelton.

Tom Skelton is the single best human on Earth. He was also my first friend at primary school and – this is weird – my hearing loss was finally diagnosed at 25, just two years after he had lost most of his eyesight thanks to another rubbish disease called Leber Hereditary Optic Neuropathy. So, in 2019, Tom and I put a kids show together in Australia about friendship and disability. The best moment came after a show when a little girl ran up to us and said “I’ve got a disability, too” like it was the best thing ever. It is the best thing ever.

What are you most looking forward to about this year’s Fringe?

The silent disco, no doubt. Is it one of the most annoying parts of the fringe? Yes. Should all of those people be buying tickets to either my show or Tom Skelton’s very good show instead? Yes. But when I’m standing next to a performer, watching the silent discoers dance past to the sound of the Radio 2 playlist and saying something very rude about it all – that will be when I’ll know the same old fringe spirit is finally back.

Book Tickets:  How to Record the Greatest Album of All Time 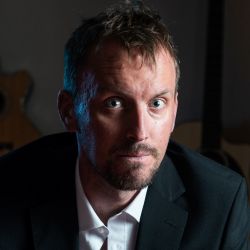