When US comedian, musician and producer McQueen Adams called up his mate Timothy Oakley stating that he wanted to create something nobody had ever seen before… they created MCQUEEN. Martin Walker finds out more.

“MCQUEEN is a combination of all the things that make me happy. A marriage of visual and audio, creating an entirely new world where anything is possible. Timothy Oakley of Phantogram fame and I created the landscape that plays out behind us live on stage. Where else can you find Vladimir Putin going on a date with a Killer Whale and falling in love? The same place where Chris Martin only talks in song and Jack White has a pair of evil Salmon coloured pants.

“It’s a weird wonderment of curiosities and absurdity with original music we create on stage and lots of funny. All narrated by a Fox with a lot of personality and wit.”

Are you are musician or a comedian first?

“I am a comedian who is obsessed with music. I love the absurd and inventing a world on stage that takes people on a ride. That’s what a good concert is like. So being able to combine the two things has been a gratifying experience.”

Any stories you can share about touring with Radiohead?

“The funniest story was one of the weirdest. It was the girl with the magic crystal. I think it was after the show in Mansfield, Massachusetts where she first showed up. She came out of the wooded area by the entrance to go backstage and she was carrying this massive rock with two hands. Of course, as they always do, the crazies lock on to me. She wanted to give Thom the magic crystal. It would be a gateway for him to travel between our world and hers so they could be together. Security made her leave and I passed on the story to some of the band mates.

“Well, sure enough the next show in Camden, New Jersey, who comes out of the wooded path towards me in the same exact outfit carrying this giant stone? She told me it was of the greatest importance that the stone was given to Thom. She said the same things to me as the other night and didn’t deviate at all from the original script. Then she asked me to touch the stone and feel it’s magic. This was a Lord of the Rings moment for sure. I told her I didn’t want to feel her magic stone. Security came out and made her leave. This time she left the stone and walked away. Then security asked me what it was. I said it’s the magic crystal, Duh! He said well it’s got to go. He picked it up and said it must of been eighty pounds. How this little lady carried this stone around was crazy.

“I was back stage and remember telling a bunch of the crew about her. They were so creeped out and then I remembered talking to Thom after the first show in Miami and he was saying how he hoped this tour had some magic. I saw him at the Atoms for Peace after show in Brooklyn and was going to tell him the whole story but Edward Norton wouldn’t let me get a word in. Some nights I wonder where she is? She could of been Radiohead’s Lady of the Lake.”

When did you first decide to become a performer and how did you get started?

“I started doing comedy at 23 years old. I was on a date at an open mic in my hometown. After a few drinks and the thought of having to watch anybody else do a Kelly Clarkson song on an acoustic guitar, I went up on stage. I did about fifty impersonations from Dave Mathews to Orlando Bloom. I won first prize which was ten dollars and a pair of socks. I still have those socks and wear them some nights when I’m chilled from the cruel world of comedy. I’d rather still have the ten dollars. I got my love of funny and music from my grandfather who was a ridiculously talented piano player. He played with Oscar Peterson, Dizzy Gillespie and Max Roach. The other was my Mother who had me at concerts when I was a kid. When you know all the lyrics to the soundtrack HAIR when you are five, you are already on this road. Plus, her quick observational humor and just sarcasm was spot on. She is smart funny and passed it on to me.”

“The house band would be the White Stripes. My lineup would consist of Bill Burr, Terry Gilliam, Robin Williams, and Marc Maron podcasting the whole show live. Is this something we can make happen?” 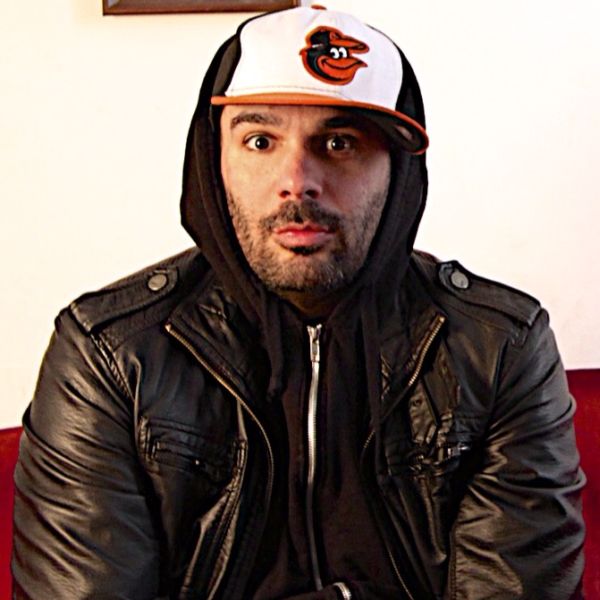