As you can doubtless tell, this whole show was conceived around the idea of it being performed in 2020… But in the end I loved the show (and title obviously) so much that I stuck with the show and kept the title to boot! When I originally came up with the show (and title of course!) it had been a decade since losing my sight, and conveniently for both the show and title, that had happened at the very beginning of 2010, so it seemed perfect to look back on a decade of being blind, reflect on those years and experiences, and also wonder what might have been had I not lost my sight… We all have those “what if?“ moments and so this was my big one, and by asking it I can reflect on how ridiculously amazing I would have been and my life would have been had this one thing not happened…  so this show looks at the reality of my 2010s as a visually impaired person and also imagines the fantasy life a counter-factual Tom with 2020 vision would have had. I think that just about covers it, and I hope you agree that keeping the title was the only thing I could really do….!

You lost most of your sight twelve years ago, diagnosed with Leber’s Hereditary Optic Neuropathy, leaving you with just 5% vision. It must have affected every aspect of your life, but did you also worry about your future performing comedy?

Yes, definitely. I was terrified and assumed that I would never do any comedy ever again. In fact, I actually first noticed some blurriness in my central vision at the Edinburgh Fringe, and managed to miss a significant plot detail during an improv gig that absolutely ruined the scene. It must have looked to my fellow performer as if I was just intentionally ignoring their (as it turned out afterwards) very obvious mime, because it appeared that I was looking straight at them. But actually their mime was happening within my increasingly blurry central field of vision and so I just couldn’t see it… I was also struggling to read information on tickets and in the fringe programme, as well as the vital information on championship manager that I was playing with one of my comedian friends. I was diagnosed not long after and lost my sight fairly rapidly after that, leaving me with about 5% vision. And I certainly presumed I would not do comedy any more, but then my improv director at the time suggested I come along to try a rehearsal. I said something like “no no, definitely not“ but he was very convincing and persuasive, so in the end I tried it and it turned out to be the only thing I was still as good at after losing my sight as I was when sighted. While I could no longer read, find my way about, go to the shops or basically do anything as well on my own as I could when I had full eyesight, I could still do improv and comedy just as well. Not saying how good that is/was, but it was definitely a moment of helping me feel a bit better, helping me to cope with and face all the other struggles that the sight loss inevitably brought.

I loved your 2017 Edinburgh solo show Blind Man’s Bluff. Whilst I learned a lot about the history of blindness and how blindness affects you, the show was very, very funny. Having also seen the hilarious follow up Blind Eye Spy, I get the impression that if the message is crucially important, the main goal of your shows is actually to make people laugh. Have I got that right?

Thank you so much for coming to see and for your very kind words about Blind Man’s Bluff and Blind Eye Spy! Yes, I do want to challenge perceptions about disability and low vision and tell stories about my own personal experiences of visual impairment, as well as hopefully making wider important points. But first and foremost, I want to make people laugh and that’s why I am telling the stories and communicating these messages through Comedy. No one who claims to be a comedian does not have making people laugh as their first, second and third goal. It’s that lovely rush of adrenaline that you cannot beat, and luckily for me, I can hear it just as well after the sight loss as I did before.

Tell me about Did You Hear What I Saw? – with Tom GK.

Did you hear what I saw? was a show that I did with my best friend and fellow comedian Tom GK about the remarkably weird coincidence that we lost our sight and hearing respectively within a few years of each other. After I lost most of my sight at the beginning of the 2010s, Tom was diagnosed with the condition that caused his hearing loss in 2013. Having met on the very first day of school, our friendship continued through childhood, adolescence, disability and beyond.  It’s a show that combines sketch, storytelling and musical comedy, and we took it to Perth, Adelaide, and have the intention to bring it to Edinburgh eventually. The pandemic interrupted that, but maybe one-day! It’s essentially a show about friendship, even more than our remarkably seemingly incompatible disabilities.

What do you think of Boris Johnson?

I think he’s a very moral, deeply thoughtful and considerate person with hidden reserves of compassion, a deep sense of purpose and an unshakeable resolve to do the right thing – oops, sorry… since 2010 I’ve really struggled with depth perception. 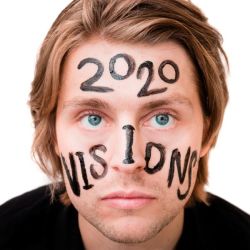