For me, the ability to perform for an hour every night for a month solid is like no other comedic training – I’ve always come away a much better act. Another massive part of the Fringe experience is the fact that so many of your friends are up here at the same time! It’s a massive social experience on top of the regular performance.

As for Edinburgh the city, I love it. It’s perfectly formed, consistently beautiful, and doesn’t have the choking urban feel of places like London, despite its size and influence.

Joan Rivers is definitely a big influence in comedic resilience. Her book Enter Talking really lit a fire under me. On the circuit, there’s loads of great acts working hard and producing brilliant work that make me want to put in the hard yards to do the same: Helen Bauer, Catherine Bohart, Chloe Petts, Joe Wells, Abi Clarke, Chelsea Birkby, SO MANY!

All of the above are up performing and will have fantastic shows. I’ve also got tickets to Stewart Lee & Cat Cohen who are very different acts but both comedy powerhouses. Plus I want to see some more musical theatre. I was up the year Six! broke big and I didn’t get to see it; so it would be nice to be at the ground level for a sensation like that.

What is your dream audience? 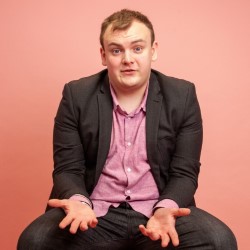